Hero HX250R: History of the very exciting concept with tall promises made by the company – and after four years of keeping the project idle, Hero says – its not worth it and the market has moved on 😀 .

The opening lines of our article back then were… “Now how many of you have written Hero off, completely! DARE YOU DO THAT!”

On 29th January 2014, Hero shocked everyone by unveiling the 250 cc HX250R which, back then, went onto become a rage. 31 PS of peak power from quarter liters was not heard of back then.

The motorcycle was announced with the following features…

At a weight of 139kgs and power output of 31 PS, HX250R boasted off class-leading power to weight ratio. It bore an uncanny resemblance with EBRs and the help was clearly evident. This all-new quarter liter mill was developed by Hero MotoCorp and did not have any relation with their erstwhile partners Honda.

The 249cc mill had a bore of 81.0 mm and stroke of 48.5 mm. Another interesting feature was the 300 mm front discs with three piston callipers (regular Indian motorcycles have two piston-callipers). 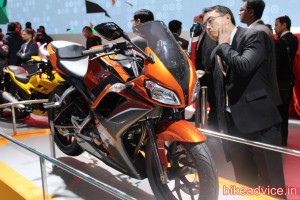 Another change it brought was Hero’s shift to 17 inch tyres which, in this case, were Pirelli Sport Demons! Hero went on to promise fantastic handling and manoeuvrability in city traffic and the styling was termed as ‘Hero lightning bolt’ design.

Hero HX250R was equipped with 7 high-tech sensors for safety and performance and sintered brake pads as well as tubeless tyres. It looked like Hero had pulled a rabbit out of nowhere.

Also Read: HX250R Shelved BUT a New 300cc Motorcycle is Coming from Hero

They went onto showcase the motorcycle at the 2016 Auto Expo, again in a concept form. During this time, Hero revealed that the motorcycle produced an even higher 31.4 PS of peak power and 23 Nm of max torque; along with a claimed top speed of 165 kmph!

So, claims were tall and everyone was expecting a stonker of a motorcycle. However, as the sensible corner of our brain was murmuring since inception, Hero finally could not muster enough courage (or let us say technical expertise) and the project has finally been axed and the reason cited by the company is as hilarious as it can get!

Today, Hero has unveiled the production version of Xtreme 200 and has, yet again failed to keep its promise of a before-Auto Expo 2018 launch of the motorcycle!

Ending lines of this story are – feel free to write them off, they are all show and no go!