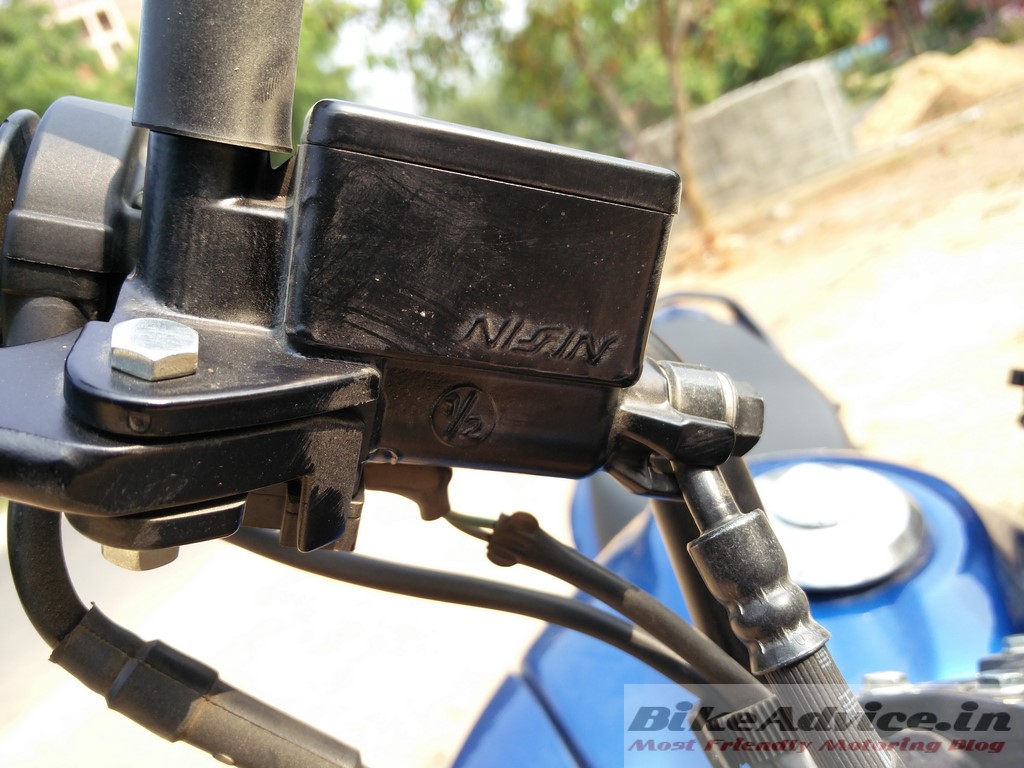 In this third part of this series, we discuss the Disc brake master cylinder assembly parts, the various types of cylinders along with their advantages and disadvantages…

In this BikeAdvice Informative Series, we are covering the various braking systems and their details. Following are the first two parts of this series. It is suggested that you read them before or after this one…

Master Cylinder is an equally important part like brake disk/rotor in disk brake assembly. Generally it is made of aluminum or cast iron. It acts in a similar way as the throttle system in any motorcycle. As throttle supplies fuel to engine, a master cylinder supplies brake fluid to the caliper assembly.

A master cylinder assembly has various parts like reservoir tank, bore, piston assembly, lever or pedal, hosepipe etc. Let’s have a look into these parts individually.

Push rod: The push rod is connected to a lever and a piston. When a brake lever is pressed it pushes the piston to slide inside the bore.

Bore: As we have seen in the caliper assembly, a master cylinder assembly also has a bore under which the piston moves

Piston Assembly: A piston assembly has a piston, series of O ring/gaskets (also known as cup/O ring, circle p, primary cup, and secondary cup) and a return spring. A piston assembly is housed inside the bore of master cylinder.

Piston: A piston or mc piston is connected to a push rod and a return spring. It slides inside the bore when a brake lever or pedal is pressed to push brake fluid.

Return spring: It is the same thing as we have seen in drum brake and the disk brake assembly. It helps the piston to move back in its original position when a brake lever or pedal is released.

Series of O ring/gaskets: It includes cup or O ring, primary cup, secondary cup and circle p. A cup and Circle p (also known as lock ring) acts as a retainer for the piston. They are positioned between the push rod and pistons. A primary seal can be a cup style or an O ring style seal. When a brake lever or pedal is pressed this cup allows the brake fluid of reservoir to flow over the top of it, into the brake hose pipe. On the other side the secondary seal keeps the reservoir brake fluid sealed and prevents it to go to the other side of the cylinder when a brake lever or pedal is pressed. It also acts as a spring retainer.

Reservoir: It is made of aluminum or cast iron. It contains the brake fluid. It has one window from which you can check the oil level and color of oil. Generally the shape is rectangular or square size but some time round shape reservoirs are used for rear disk brakes.

Brake Fluid: Brake fluid is a type of hydraulic fluid. It is as important as oil is to an engine. It transfers force into pressure. As engine oil, brake fluid is also graded like DOT 3, DOT 4 etc. DOT stands for Department of Transportation. For more info on brake fluid click here

Bladder: Bladder is found in open system master cylinder. It is made of thin walled rubber which allows it to deform via expansion and contraction. It has liquid on one side and atmosphere at the other side.

When a brake lever or pedal is pressed, the push rod which is connected to the lever or pedal and piston, pushes the piston. This movement allows the piston to slide and push the return spring inside the bore of master cylinder, which generates pressure in the reservoir tank.

At this moment a primary seal allows the brake fluid of reservoir tank to flow over it into the brake hosepipes. A secondary seal ensures that the brake fluid does not go to the other side. When a brake lever is released the return spring pushes the piston back into its original position and allows the fluid to flow back to the reservoir via hosepipe and cylinder bore.

An open system master cylinder assembly has bladder inside the reservoir tank. This bladder helps to adjust the level of brake fluid into the master cylinder. As one side of the bladder is exposed to the atmosphere it expands or contracts according change in heat.

A closed system master cylinder does not have the bladder in the reservoir tank. Hence the system requires manual adjustment.

We have covered all the three major parts of disc brakes – disc, caliper assembly and master cylinder assembly. In the last part we will see the working principal of disk brakes, maintenance tips and advantages and disadvantages of disk brakes over drum brake.