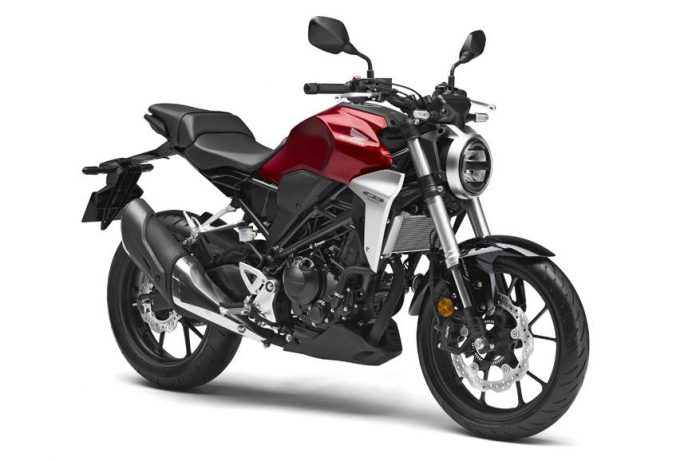 CB300R BS6 launch may bring with it a lot of interesting bits, including reduction in price. Let’s discuss…

Honda lists its motorcycles under two tabs on its website – ‘Motorcycle’ and ‘Super Bikes’. As their names suggest, all locally produced mass market bikes, like Hornet, X-Blade, Livo, etc were listed under the ‘Motorcycle’ tab whereas all premium products, like the Africa Twin, Fireblade, etc were part of the ‘Super Bikes’ tab.

Interestingly, CB 300R was also listed under the ‘Super Bikes’ tab as it was a CKD (completely knocked down units) motorcycle till BS4. Around April, Honda rejigged its website and removed all non BS6 2-wheelers from the ‘Motorcycle’ tab. This meant that Hornet 160R, X-Blade, CBR 250R, etc were no more listed on the website.

Later, as Honda launched their BS6 versions, they were updated under ‘Motorcycles’. For example, Livo and X-Blade have received the BS6 updates and are now a part of the website.

However, Honda did not remove the non BS6 products from the ‘Super Bikes’ tab which means that motorcycles like CBR 650R, Goldwing, etc (which are still not BS6 compliant) continue to be displayed there. There was a big change, however. Honda removed the CB 300R from this (Super Bikes) tab completely around the first week of July. You can check Honda’s current website here.

Now, its treatment just like the mass market motorcycles is interesting. Let me take you to a March 2020 report when Yadvinder Singh Guleria, who has been elevated as the Director of Sales in the company recently, said, that Honda will start ‘mass production’ of some of its existing premium bikes including one product below 500cc!

From the existing lineup, Honda only has the CB 300R as the ‘premium product’ under 500cc. So, it was clear that Mr Guleria was talking about this retro classic roadster. He added that this will be done to make the products more affordable. You can read more about it here.

Now, since the 300R is confirmed to be ‘mass produced’, almost, Honda will have to change its position on the website. It can no longer be listed under ‘Super Bikes’. And once it will be launched the company may place it properly under the ‘Motorcycles‘ tab. This is the only logical explanation of the removal of the CB300R from the ‘Super Bikes’ tab that we can get.

Corona may have delayed things a bit, but brace yourself up for the new, localized and hopefully lesser priced CB 300R in the market, soon…