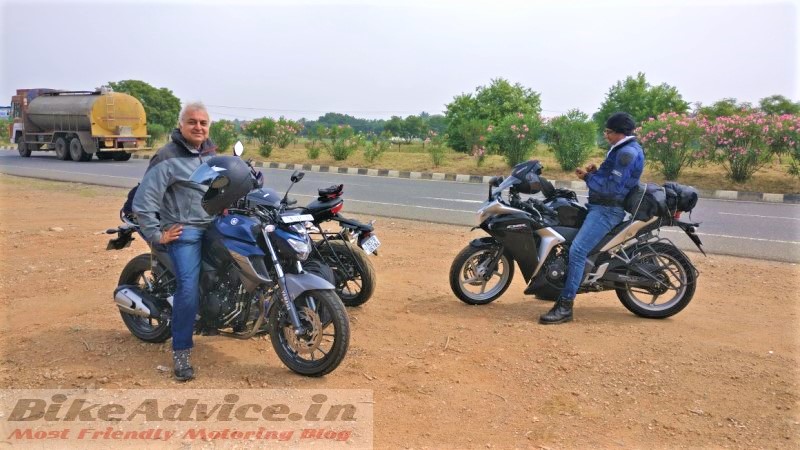 This beautiful, quick travelogue has been written by Minoo Avari, an avid 74 year young biker. He has earlier shared his buying experience of CB300R as well as its first service & registration ride.

Over four decades later the same principle applied.  This time around, instead of an unreliable Ambassador, a Yamaha FZ 25, a Honda CBR 250r and my Honda CBR 300 tackled the road down to the plains.  Mac (Manmohan) on his new Yamaha, had to take it down to Dindigul: the company had recalled this particular model to change some part in the engine.  Mac led the way while Kishore’s CBR 250R followed me, for no reason other than to keep a sharp eye out for any antics I might get up to. So it was, till we were done with the Batlagundu bypass and arrived at Meenakshi Bhavan for breakfast.

I wasn’t hungry, having already eaten at home. While the boys were stuffing themselves with Dosai, Vada and Pongal, I took the time to remove the thermal liner from my Joe Rocket jacket.  Then, to add to speculation of others at the restaurant, I proceeded to remove my pants. There really was no cause for alarm. It was only the Quechua rain pant, over perfectly acceptable trousers, I had put on to thwart the early morning chill that engulfed Kodaikanal.

We had left at 7:00 am that Tuesday morning, the 14th January 2020, and it was pretty darn cold. With that exhibition of disrobing over, we proceeded to the Yamaha workshop in Dindigul. Arun, the workshop manager, was thorough, and though nothing was actually changed, some tightening of an engine part was assiduously performed… and that was all there was to it.  After a forty-five-minute delay, we proceeded on our ride to Karur.

Mac was no longer the leader: indeed,the five-speed gearbox on his Yamaha limited him to a hundred kilometres an hour, while the brace of Hondas sped away in sixth gear. Kishore and I would have to slow down, every once in a while, for Mac to catch up on the smooth four-lane National Highway. To my chagrin, the Honda CBR 250R was the fastest of the pack. That slight notwithstanding, it was a heady feeling between Karur and Namakkal. I felt like the King of the road, doing a nifty hundred and thirty and even touching a hundred and forty… until some darned Audi overtook us!

Later a BMW sedan sped past, while we pretended to slowdown for Mac to catch up. Being Pongal (the harvest festival), most restaurants in Namakkal were closed. However, we did manage to find a ‘Nalla’ restaurant and were served a delicious lunch, which we quickly digested. The stretch from Namakkal, heading East to the Kolli hills, has a generous smattering of unheralded speed-breakers, which not only detracted from our performance bikes, but aided in processing our food all too quickly!

In the event, it was only forty-five minutes before we were confronted by a damn great hill, looming through a blanket of industrial haze. I wondered how we were supposed to go about skirting that mountain of forest. It was a perpendicular wall! The answer was quickly forthcoming: hairpin bends, which came thick and fast. The road, without potholes, is well cambered but as narrow as they come.

One, two, three … and then I lost count. Just barely out of one turn the next was already upon us. By the time we got to the top I was dizzy from the seventy-hairpin-bends that hit us, one after another.  This was Mac’s terrain though.  A five-speed gearbox notwithstanding, the low torque and the low throaty rumble of his exhaust made it seem like the bike had been designed specifically for this road.  The position of leader had shifted. There was no doubt about the Yamaha reclaiming its crown as King of the road.

None of us had bothered to check the description of this hill section. After all, we were seasoned riders, having tackled the fearsome Palani ghat, up and down from Kodaikanal, several times … and without a second thought. Perhaps that was fortunate. When we checked-in, at the Silverline hotel in Kolli Hills, this is what we discovered on google:

“Kolli Hills is one of the beautiful places, situated in Namakkal District of the state of Tamil Nadu. This beautiful location is referred to as the KolliMalai, and it means the ‘Mountains of Death.’ The hills are over almost 1000 to 1300 meters in height that cover more than 280 sq. kms.”

It was already evening when we dumped our luggage in the room. My neck ached with the effort of lugging the knapsack on my shoulders through the day. After a cup of tea, we limbered up with a walk around the premises. It left us bemused. Something was wrong.  There was not a sound! Instead, we were enveloped by a silence which no amount of money can buy – anywhere in the country. Perhaps it comes across as an unbelievable fairy-tale and I perfectly understand … but, there really is such a place.

The Kolli hills are a slice of unspoiled paradise.Tucked away in a remote part of the relatively undiscovered Eastern Ghats, it is perhaps the seventy arduous hairpin bends to get there; together with the frightening description from google, that have kept tourists to a minimum thus far. Ours was a last-minute decision to ride somewhere over the ‘Pongal’ holidays. With just three days at our disposal, it suited us ideally.

There is another route from the North, for visitors coming from Bangalore, Hosur and Salem.  We didn’t get to see that, coming at it from the South as we did. The next morning, we had the whole day to explore these magnificent hills. Here too, it is hairpin bend after hairpin bend but the views are extraordinary. At one undiscovered point we were able to get a view of Thuraiyur, in the plains, with Trichy just beyond.

It was breath-taking and almost a spiritual experience. The religious side of things though consist of a mere two temples. These are without ubiquitous loudspeakers making for a heavenly interlude. We didn’t see any mosques or churches, which made me wonder at the ethereal silence on offer.

We started back on Thursday the 16th, because I had to get back to celebrate our fiftieth wedding anniversary. It also coincided with Kishore’s fifty-first birthday! After a brief halt at Joe Antony’s farm in Palani, where we had some refreshing coconut water, I bid adieu, leaving Kishore and Mac to have lunch with Joe.  I rode up to Kodaikanal alone and that was a nightmare. The traffic was unbelievable with over a kilometre of cars, buses and vans at a complete standstill.

Riding a motorbike does have its advantages. It allowed me to race past this cesspool of tourism and get home in time for lunch. In conclusion, it was a magnificent holiday. Though we had covered just under seven hundred kilometres in three days, it is the ethereal silence, still lingering in my ears, with the abundance of hairpin turns that make me dizzy when I think of them!