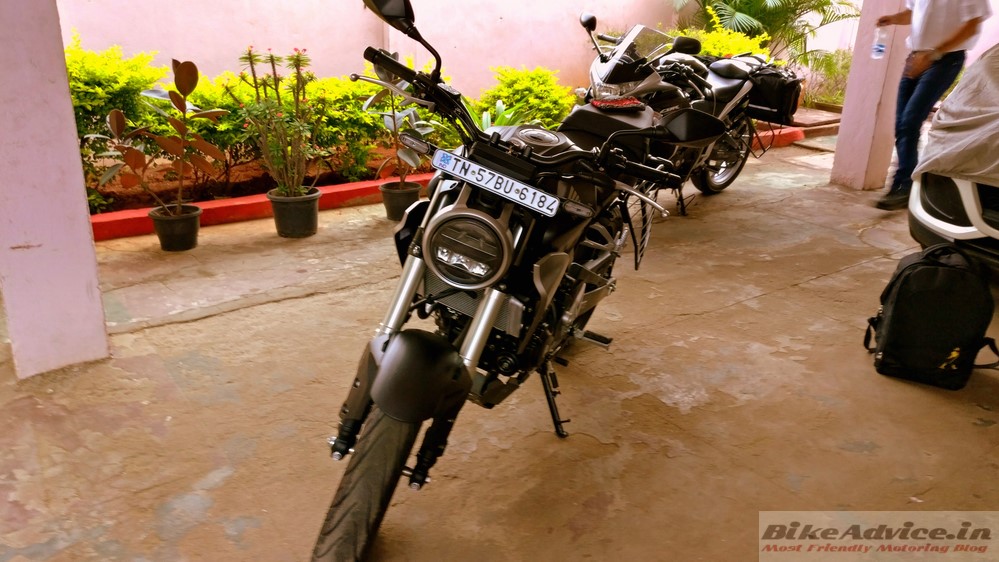 Honda CB300R user review: An avid biker and a BikeAdvice reader 74 year young Minoo Avari has shared his impressions of Honda CB 300R’s registration and first service. An erstwhile CBR 250R rider, this is a build-up of his first impressions few days back – you should read that interesting story here… 🙂

Here its is… in his own words…

“I suppose being a Parsee has some distinct advantages.  Turns out everybody wants to buy your vehicle! If you are a Parsee – and a doctor to boot – a mere whisper, hinting your vehicle is for sale, is enough to cause pandemonium.  Fortunately, I’m not a doctor but it was bad enough.  I had to sell my CBR 250R in order the purchase the new Honda CB300R and the moment word was out, it was the equivalent of ‘Howdy Modi’ in Houston.

“Sir, you are selling your bike.  Please let me have first refusal!”

These were some of the messages I got on WhatsApp, Email and in person. My mobile was busier than democrats crying for Trump’s impeachment! So, when Kishore said he was interested and made a firm offer, I was only too glad to let him have the two-wheeler. This has resulted in black looks from the public at large; a cessation of the numerous jokes and videos from friends on WhatsApp, which is not altogether a bad thing … and then a bonus: Kishore Cariappa is my constant biking companion.

We rode down to the RTO office in Batlagundu, to get my bike registered and Kishore to get the 250 CBR transferred to his name. My thanks to Murugesan of Sornam Honda, Dindigul, who sent Mahesh, from his office, to help out with this ordeal. It was just as well. The RTO in Batlagundu had never heard of a Honda CB 300R and was at a complete loss about what to do next. Mesmerised, he adopted the typical government style of Rigor mortis.

“This is the first such bike to come here for registration.”

His furrowed forehead led me to believe he was on the verge of a nervous breakdown. This was when Mahesh stepped in and explained what had to be done. After that it didn’t take too long. Kishore’s bike was transferred to his name shortly thereafter and, with that done, we headed off to Palani via. Sempatti and Odanchattram to spend the night at Joe Antony’s farm. A few kilometres West of the Arulmigu Shri Dhandayuthapani temple, he has a beautiful coconut plantation with a spectacular view of the Palani ghat section.

Joe is more than a fellow biker: indeed, he is our guru. With a wealth of biking experience and the owner of several bikes, which he has bought and sold in the past, (the last being a Ducati Scrambler), he is currently on an Enfield Thunderbird.  This is only an interim measure, before he buys something more in keeping with his prowess.

Needless to say, it was a delightful night. In absolute God-given silence, interspersed with snippets of whispered conversation; the view of the Palani ghat with its multitude of hairpin bends, held us enthralled. Sitting atop Joe’s open terrace, we watched the lights of vehicles take sharp hairpin bends up and down from Kodaikanal. Yet there was no sound from heavy vehicles climbing the hill, nor any ubiquitous blaring horns … no, none of this reached our ears.

It was sheer Paradise until the bark of a nearby Sambar, followed by distant trumpeting of wild elephants, suggested it was time to go to bed. We were up early next morning and rode up the Palani ghat, already thinking of our next trip to Coimbatore. My first free service, at Suryabala Honda on Trichy Road came about soon enough – you must do the first service between 700 and 1000 kilometres or within a month from purchase.  I barely made the 700 kilometres within the stipulated period.

Initially I was set to go alone but the temptation was too much for Kishore. Just under a half-hour ride from my home, I found him eagerly waiting by his estate gate and we set off without further palaver.

It was early Monday morning, the 23rd of September. Under a grey sky we were fortunate to make it down the hill without rain. A short stop for tea and petrol (the 300 uses only Speed for fuel) and we were hurtling toward Dharapuram for breakfast at the famous Apoorva restaurant located conveniently on the bypass road. It is a popular stop.

In short order we demolished puris, dosais, dahi wadahs and topped it off with excellent filter coffee. We then came upon the broken stretch to Palladam, where the road is being widened, and all the bumps and jolts helped with digesting our enormous breakfast.  Without too much ado thereafter, we found ourselves at the workshop shortly after ten.

Dharmaraj, the workshop manager, was waiting for us and took charge of the bikes. We hung around for a while admiring an Africa Twin and a pair of CBR 650’s.  The latter are sheer magic to ride on open stretches; contending with traffic though is a different ballgame altogether!

The hotel I booked was just a short walk from the workshop and after a shower and a change of clothes, we went in search of a helmet. Eventually I found what I wanted at Brookfield Mall on Metupallayam road. The boys in charge of Desi Haus (Urbane Accessories) really know their products and selected a helmet that suited me fine. They helped me do an online registration, which puts the two-year guarantee in operation. I then went a bit overboard and bought paneer bags, designed for sports bikes with their higher exhausts, as a big thank you to them …

We got back to the workshop with my new purchases and were redirected to the showroom, across busy Trichy Road, to collect my new number plates and Insurance policy. A plethora of staff work there. Sitting in front of computers the place is bustling with activity; the same can’t be said about their attitude.  I was handed the insurance papers, which they had unilaterally done with Shriram General Insurance (I would have preferred National Insurance), without my bike number on the policy.  Fortunately, the frame number and engine number were mentioned.

The number plates, with four large bolts, were handed over without any instructions.  I asked if the workshop would fit them for me.

“No, you have to fit them elsewhere. There is a shop at the end of the road that will do it for you!”

Nonplussed, we left the showroom with number plates in hand and were fortunate to meet Mahesh. He is in charge of the showroom. Taking the number plates, he told me not to worry as he would arrange to have them fixed on the bike … he was as good as his word.

Back in the workshop our bikes were ready; we had to sign papers and complete all the formalities. Kishore’s bike (my old 250R) needed a front fork seal changed and, with an oil and filter change, the bill came to over four thousand rupees. My 300, despite a free first service crossed two thousand. I guess material costs have gone up, what with GST and that sort of thing.

Dharmaraj was courteous and friendly. He said I could leave the old helmet at the workshop and could pick it up when I came next for the rear wheel stand. He was hopeful that the radiator guard too would be available during my next visit. Thereafter, with nothing much to do, we hung around talking with customers, admiring their bikes and discussing Honda motorcycles. They were astonished to learn that I had been with Honda ever since Hero Honda launched their CD 100 in 1985. I sold that in 2004 and picked up the newly launched Honda Unicorn in 2004, before selling that to buy the CBR 250R, now the property of Kishore Cariappa.

It was drizzling when we got back to the hotel.  Not wanting to get wet we ordered dinner through Uber Eats and, stuffed with pizza and lava cake, went to bed. It was still drizzling next morning but fortunately, by the time we finished our tea, it had stopped.

“Perhaps we should take the road from Palladam to Udumalpet,” I suggested.

Kishore however has a thing about Dharapuram. “It’s only a few kilometres of bad road.  That shouldn’t be a problem.”

Well it was! The rain had made the two bad stretches into a quagmire. It was hellish, following slow-moving heavy vehicles engaged in repairing the road; getting splattered with mud from tyres grinding through the slush and then having to negotiate bumps and craters filled with none to clean water. It was a nightmare and I was certainly glad to be back at Apoorva for breakfast.

We didn’t waste too much time as we were keen to get back to Kodaikanal before the afternoon and evening showers. Just one stop at Palani, for Kishore to get his pollution control certificate, before we started climbing the hill. A little before Vada Kavunji a few drops of rain sounded an ominous warning. Quickly tugging on our rain pants, we started again but this time there was no escape.  A deluge of water cascaded from the skies and we were drenched in short order. My new helmet, with a non-fogging addition to the visor, was a God send. I was able to see and keep my face dry at the same time.

There was sunshine in Perumal, heavy rain through Tiger Shola, a brief respite past Silver Cascade and then rain all the way home. Believe me, good as a Joe Rocket jacket might be, it isn’t remotely waterproof!