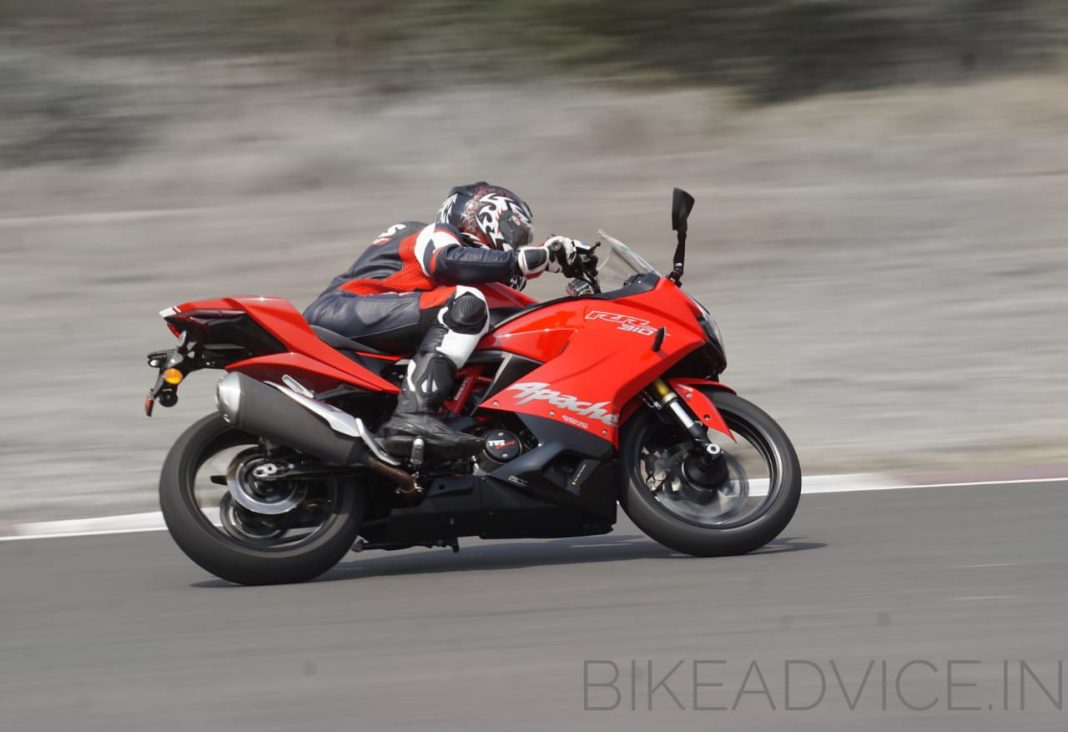 In the last couple of years, there have been two massive developments in the Indian motorcycling scene. Two of the major Indian two-wheeler manufacturers took giant leaps and presented us with the best of technology, taking Indian engineering to a whole new level. Commercially known as ‘Dominar’ and ‘Apache 310’, both the India-bred projects have showcased Bajaj and TVS as manufacturers which can offer us brilliant entry level sports machines.

There has been a remarkable improvement in TVS’ products in the last few years and Apache 310 is a whole new level. It was already an excellent motorcycle and TVS has improved it a wee bit more in the latest 2019 iteration. Though there are no ground breaking changes in the latest edition, TVS still called the media for a test ride at the Madras Race Track, Chennai, may be to send across a message to the masses – that the biggest Apache is now a more accomplished machine.

Talking about the biggest change – it, simply, is the introduction of slipper clutch! Since the smaller 200 had it, it was just a matter of time when the 310 received it. TVS says this is a ‘race tuned’ slipper clutch which has been ‘engineered’ on race tracks. In fact they had put a number to it – TVS has spent more than ‘200 hours’ on the race track in tuning the cam angle and spring force for launch, slip function and engine braking.

It also comes with assist function, which they say, helps in higher torque carrying capacity. Though I tested the older Apache 310 at this very track, it is very difficult to pinpoint the actual difference, between the two versions in a few test laps around the circuit without a data logger, especially when you are losing your body water at a speed of one bucket per minute!

However, I did try to throw the wheel out at the longest straight by downshifting two (and once three gears) at one go and it did respond in a civilised manner. In fact, I don’t remember my rear wheel hopping out during the complete ride, including the one heart in the mouth moment when I ran terribly wide in one corner! That may be because of the reduced engine braking or my lack of track worthiness 😀

The clutch lever pull was also slightly less effortsome; TVS says it is upto 20 percent lesser, which should be a boon in city rides. But what was more noticeable was the bettered engine refinement and that slight little more punch, especially during corner exits!

TVS also says that the low speed drivability of the Apache 310 has been improved, which can only be tested in practical riding scenarios but its composure at 25 kph in the pit lane in fourth gear was just an indication of how things could be. At this speed my Dominar feels like it doesn’t want to live in this world anymore! This is just another point ticked over the RC390!

TVS also tells us that there have been other improvements to the overall motorcycle, detailed information of which was not shared. But this leads us to believe that most of the minor issues that it was plagued with in the first year of production (related to the chain noise, vibrations etc) have been resolved and the 2019 iteration is a more complete bike. For instance, there is a new chain roller, heavier bar end weights and a rubber liner to the windshield to reduce chain noise and lessen vibrations respectively. I can vouch for the vibrations part – they have been reduced and become intrusive only at higher rpms.

What Has Not Changed?

Well, everything! The brilliant track behaviour of that 313 cc DOHC, single cylinder, reverse inclined motor, the very nimble trellis frame and that well-set suspension, along with those complementing Michelin Pilot Street tyres. All of this helps in making the feel of the bike at least 20 kilograms lighter than what it actually is, and it is a big achievement frankly! You flip it into a corner and it obliges without any fuss whatsoever.

Now comes the better part – TVS is not leaving the existing owners of the motorcycle isolated. Existing Apache 310 buyers have received a new ECU update recently (the same ECU settings go to the 2019 version) and they are also being offered the race tuned slipper clutch as a powerpart. So, you can visit your nearest dealership and get it retrofitted at a price of Rs 3950 only which includes the part and fitting charges!

Slipper Clutch… and what else..?

How can an update not come with cosmetic changes and colours…? The 2019 Apache is now being offered in a new colour called as Phantom Black. In essence, it is the metallic black shade with white and red stripes, which replaces the older matte black colour; which could be a resultant of public feedback; the Racing Red colour continues to be on offer. There are minor changes to the decals as well but let me tell you that the motorcycle looks as mind-blowingly good as it did on day one, or may be slightly better!

The 2019 version comes at a very minor price increment of about Rs 2600 (now costs Rs 2.27 Lak ex- Delhi) which is completely justified considering what you get in return. Now, with the product attributes taken care of, TVS has announced that they will take Apache to more dealerships (read cities) of India in the coming months, which should help increase its visibility and reach and hence, should enhance its sales.

Here is how the original Apache 310 sounded

The noises from the engine and the exhaust note both are more refined now. The exhaust sound also appears to have a deeper rumble.

It looks like manufacturers are overestimating the potential of our market in this price range. A 2 Lakh on road machine (read Dominar) cannot garner 10,000 monthly numbers in the coming half a decade, at least! TVS was far more realistic with its target of 10,000 units in the first year which translates to 800-900 units a month.

Apache 310, as I said, has always been a lovely motorcycle. It ticks almost all the boxes – looks brilliant, has a commendable road presence, comes with German engineering, etc. With the latest update, TVS has ironed out most of its issues as well, and that at almost the same price.

What is more endearing is that they have lent the same/similar changes to the older versions as well which kind of imposes faith on the manufacturer that they will constantly improve their flagship with changes percolating to the existing owners as well.

Its only direct competition is the RC390 which is a lot more aggressive and if you like that sudden burst of power and a more dedicated posture, you would always head to a KTM showroom. But for all the practical purposes – like riding to your nearest grocery store, taking the highway a tad bit too often, visiting a pub, etc – the Apache was and still is the better motorcycle; and it comes cheaper too!

For a detailed review of Apache 310 you can head to our comprehensive road test conducted by Shiraz, our road test editor and since the motorcycle has essentially remained the same – most of it holds true.