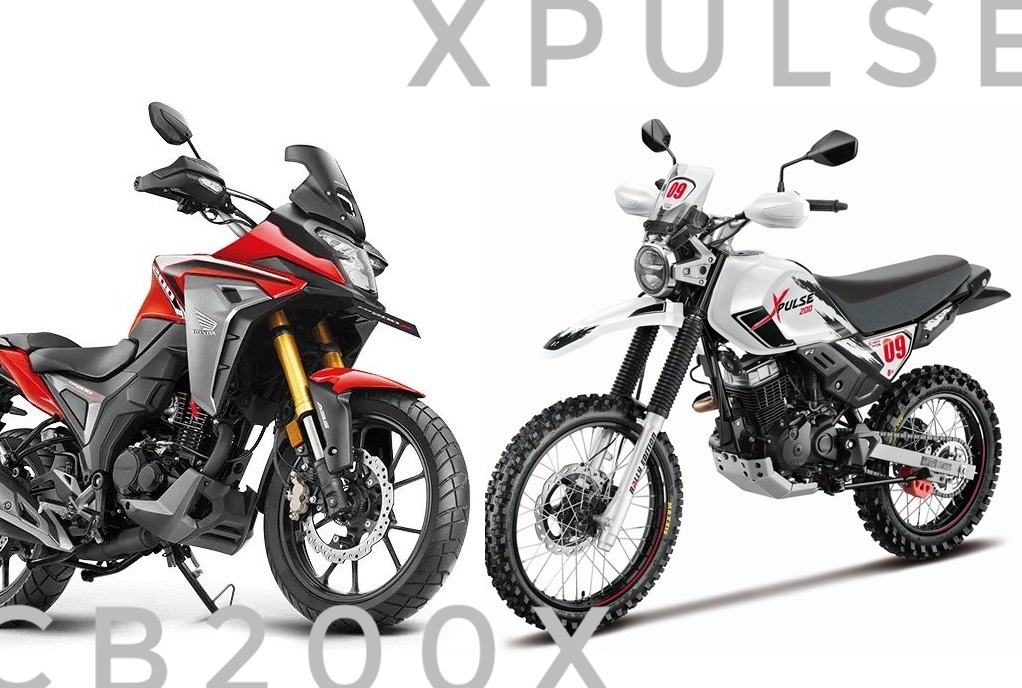 The next question for any ADV buyer with a budget of around 1.5 Lac will be between CB200X vs Xpulse. We list the key spec differences between these two models..

The new budget ADV from Honda the CB200X has launched after a short phase of hype. In this article, let us check out how tech specs-wise the New CB200X is different from another affordable ADV Xpulse from Hero MotoCorp.

Here are the major differences

Engine & Power: The XPulse packs in a slightly bigger engine and it also produces more power and torque.

Suspension: While the Xpulse gets conventional telescopic shock absorbers at the front, the CB200X comes with more premium looking golden colored upside down front forks. However, travel of Xpulse’ is more.

Tyres: The CB200X continues with the same tyre specs of the road-going Hornet 180 but they are block pattern. Xpulse comes with more off-road friendly 21-18 inch set-up.

Ground Clearance: GC is one of the most important trait for ADVs and the Xpulse comes with a very high ground clearance of 220 mm whereas the CB200X continues with the same 167 mm set up of the streetfighter.

Weight: One area where the Honda outscores the Hero is the weight. CB200X is lighter by full 10 kilos.

Fuel Capacity: The Xpulse comes with an added fuel tank capacity of 1 liter over the CB200X.

Seat Height: The CB200X comes with a more accessible seat height of 810 mm; the Xpulse is higher by 13 mm.

Despite scoring much higher on almost all parameters, the Hero Xpulse has been priced pretty well. It starts at INR 1.20 Lac whereas the Honda CB200X costs INR 1.44 Lac. Hero also offers an off-road kit for the Xpulse at an additional cost.

So, if there is a question of one motorcycle between these two – the Xpulse definitely is better in terms of specs and ADV features. However, if you are looking for a motorcycle for both city rides and occasional soft roading, with a semi-fairing, you can also check out the Honda.