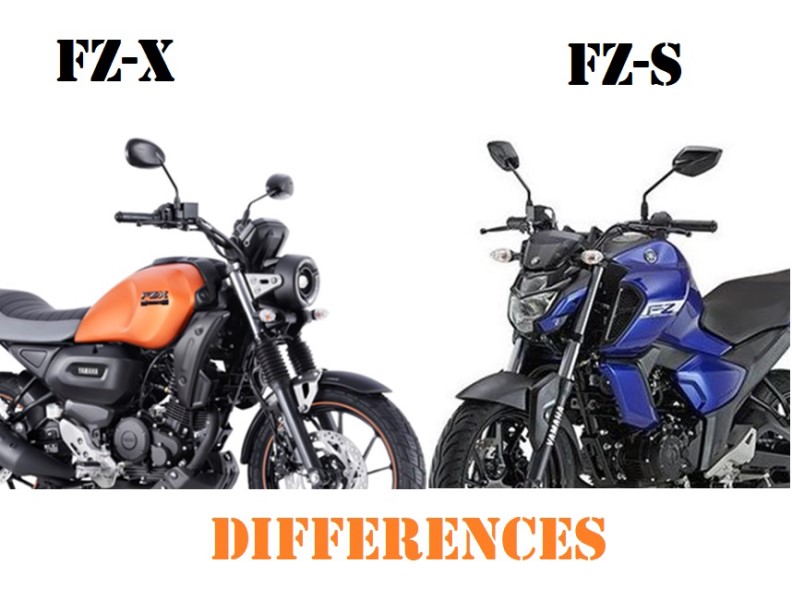 We list FZX vs FZS differences: Both the models are based on the same platform but there are various dissimilarities between them…

The new Yamaha FZX has been the talk of the town since its first glimpse hit social media. The 150cc roadster has been inspired by Yamaha’s international model XSR155, however, it is based on the commuter 150cc platform of the FZ, and hence is the nomenclature.

Obviously, since there is platform sharing, there are a whole lot of similarities between the two models. But in this article, we will talk about the differences between them.

List of All Yamaha FZX Accessories and their Price

That is probably the biggest difference of them all – the design. While the FZS is a streetfighter motorcycle, the FZX is introduced as a neo-retro model. And that also makes it (the FZX) the only such product in and around this segment and price range. In fact, there is nothing close. This gives it a distinct appeal.

Being a retro styled model, the tank and the front face of FZX are simpler whereas the FZS carries a forward-charging new-age design with a curvy and bulbous tank accentuated with that chrome installed on the flanks.

Apart from the very visible differences in the headlamps, the seats are also dissimilar. Though we haven’t ridden the X yet, but its simpler layout suggests that it could be pillion friendly.

Yamaha also says that the FZX has a bassier exhaust note catering to the theme it is positioned as.

While both the FZX and FZS are 150cc motorcycles there is a significant difference between their pricing. The all-new Yamaha FZX costs 1.17 Lac to 1.20 Lac, the FZ ranges from 1.05 Lac to 1.12 Lac.

We are of the belief that being a simpler motorcycle, the FZX could have been cheaper by a few thousand rupees!

Yamaha has placed the FZ at the conventional position of the premium commuter 150/160cc motorcycles. However, the FZX sits higher up the pedestal. In fact, it is one of the costliest models in the commuter range.

Basically, the company is harping about its neo-retro styling and believes people will buy it for that – since there is no direct competition.

The fuel tank capacity of FZS is 13L which is 3-litres more than that of FZX (10 liters).

The bigger spec change is the weight; while the FZ makes up a wee bit for its lack of power figures by tipping the scale at 135 kilos, the FZX weighs 139 kg – 4 kilos more. This will mean slightly lesser power-to-weight ratio for the neo-retro bike.

While the tyre size of both the models is the same, the FZX comes with block patter tyres (similar to the international XSR155). The FZ continues with regular road tyres.

Yamaha Electric 2-Wheeler Under Development, But…

The FZS is available in five color variants but the new FZX limits itself to three color finishes only.

So, this is what differentiates both these models. We will get to know about the engine response, seating posture and road behavior of the FZX once we ride it.