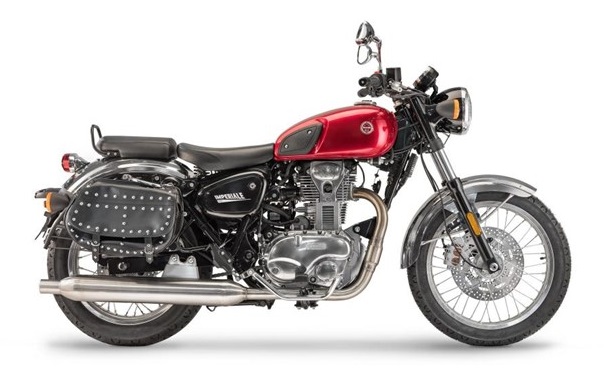 Benelli has launched its most important product yet – the Imperiale 400. It has been priced attractively at Rs 1.69 Lakh ex-showroom India (launch story here). In this story let us list its key specs and other details..

Imperiale produces 21 PS of peak power at 5500 rpm and 29 Nm of max torque at 4500 rpm from its 374cc, single cylinder, air cooled, 4-valve, SOHC engine. These specs match the Chinese version but the max torque rpm is 1000 rpm higher than the UK-spec version (acc to Benelli UK website).

In comparison, arch-rival Classic 350 churns out 20 PS of power at 5250 rpm and 28 Nm of torque at 4000 rpm. Another difference is that the Imperiale is fuel injected whereas the 350 cc Classic makes do with a 29 mm constant vacuum carburettor. Both of them are paired with 5-speed gearboxes.

Imperiale comes with 41mm telescopic suspension and 300 mm and 240 mm disc brakes at the front and rear respectively. It is shod with dual-channel ABS as standard.

However, the two areas whereas Imperiale fares poorly are, 1) it weighs whopping 205 kg as compared to the already heavy 192 kg Classic 350 and, 2) it has a fuel tank capacity of 12 liters (Classic comes with a 13.5 liter capacity tank).

After Jawa, Imperiale 400 is the second direct rival against Classic 350 in a span of a few months. Jawa has already caused few problems for the largest seller and it will be interesting to see how would Benelli further aggravate it for Royal Enfield.