So, all these years you were waiting for KTM’s 390 Adventure which was confirmed by Rajiv Bajaj officially, who also announced that it will be launched in India as well (link to story). Few days back, just when you probably were set to schedule your visit to the nearest BMW showroom (for the G310 GS), KTM dropped another bomb when they revealed the launch timeline of the 390 Adventure (details). So, the recipe is set, its seems, for the most awaited motorcycle which has been expected since the first Duke 390 set foot in 2013.

We have these plethora of spy pics of the upcoming ADV credit Motorrad. These spy pics reveal the motorcycle in almost all angles along with a render pic which gives us a good view of how the production version could look.

Let us collate all the information that spy pics have revealed so far.

This appears to have a sensible relation with the 390 platform that we have seen. Look at the engine and you will notice the similarities (which were not found on the earlier claimed spotting of the motorcycle). However, this more looks like a relaxed Duke 390 with some ‘ADV’ traits! 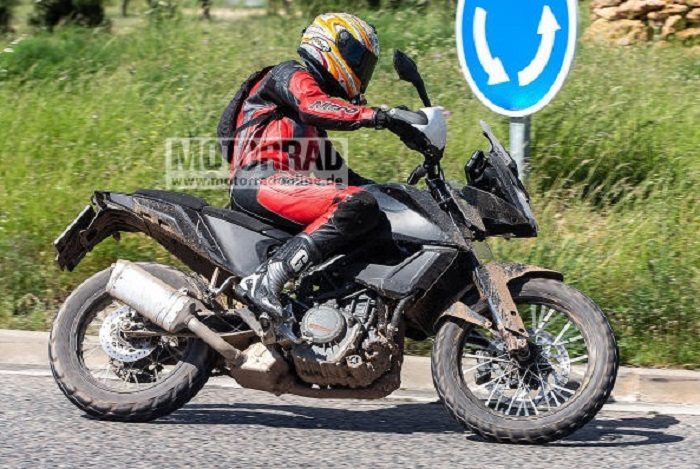 As compared to the older spotting, the new mule appears to be in a closer to production form. It gets spoke wheels and those knobby tyres appear to be 19 (front) and 17 (rear) inchers instead of the 21-19 setup of the bigger Adventure models. The rear tyre also may be thinner than the 150 mm of Duke and RC.

There is no traditional beak as you would associate with ADVs. The exhaust canister is very different suggesting changes; and that headlamp appears to be a direct lift from the Duke but has an added fairing and a mini-visor.

Both the front and rear suspensions appear to be bigger with higher travel (which may mean a slightly higher saddle height). Switchable ABS will definitely be on offer along with the other electronic aids from the Duke 390. KTM has also worked on the styling and it gets newer body panels. The production model may get a proper engine underbelly cover. 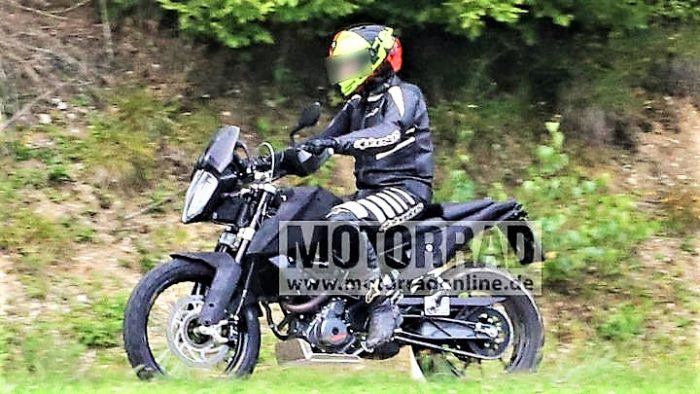 What is interesting to note is the pillion seat which appears to be adequately long, contrary to what current 390s are infamous for.

KTM may be planning to throw in another motorcycle in this very successful 390 series – a scrambler! Yes, spyshots which surfaced towards the end of last year at Motorrad Online spilled the beans. 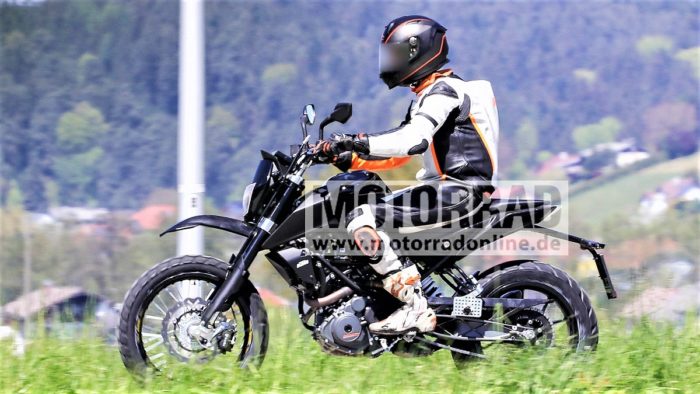 As is obvious, both these motorcycles will continue to use a lot of parts from Duke 390 to save on the overall costs.

The launch has been announced for next year, officially. But KTM disappointed its fans by not showcasing it at this EICMA since it is generally the company’s first unveil ground for most of its motorcycles.

So, if you are headed to your nearest BMW store, wait, KTM may have a (much) better priced alternate…