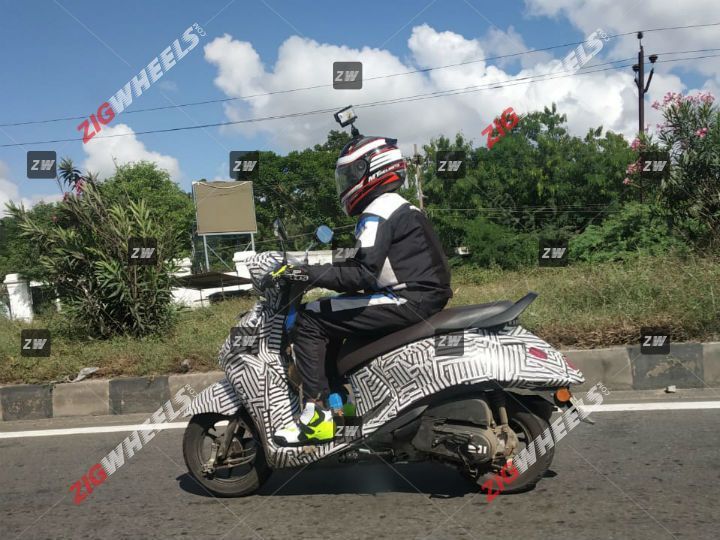 2020 Fascino BS6 spy pics have surfaced suggesting major design changes to the scooter. And then we already know it will have mechanical changes as well…

Each and every motorcycle and scooter in India, which the respective maker intends to continue selling, will have to be updated in the coming months, before April 2020! The reason is the Bharat Stage VI emission norms which get enforced from 1st April 2020 and no manufacturer can then produce a BSIV compliant two-wheeler (or car, for that matter of fact) for our domestic market.

In a latest update, the 2020 Yamaha Fascino has been spotted testing under heavy camouflage. The scooter is seen adorning significant changes and this is a clear indication that along with the engine upgrade, Yamaha intends to bring about freshness to the design of its best selling scooter as well.

As a first it is sporting an elongated tail which may house an external fuel cap. The lines swoop from the footboard and end onto the newly designed tail lamps, posing as an interesting stance for what is already a good looker. The seat also appears to be longer and there are changes to the front section as well. The headlamp has been redesigned and that front apron also appears to be slightly different from the current scooter, from whatever is visible in these pics. That grab rail is simpler too…

The biggest change will come in the engine as it will become BS6 compliant and power figures may go down a wee bit. For reference, the existing BS4 compliant 113cc air cooled single cylinder motor makes 7.2 PS of peak power at 7500 rpm and 8.1 Nm of max torque at 5000 rpm.

Since Fascino is a big seller for Yamaha, expect this updated version to be available closer to the deadline, most probably sometime during the first quarter of 2020. Price is also expected to be 10-15 percent higher than the current version’s Rs 56,023 ex-showroom Delhi.