Today morning my friend Raghav called up and told me that his brand new black Yamaha FZ16 has just arrived. He was really excited and he started telling me how great the bike was. Eventhough I had tested the bike a few weeks ago, I wanted to ride on it again… in a more relaxed pace. So I told him that I would arrive to his place as soon as possible and I started out. It was a 18km drive as he is situated in the other end of the city. I enjoyed the cruise in my Karizma along the NH7 road and around 11 am I was at his home.

His Yamaha FZ16 was in its best. As shiny as it could ever be. And this is the first time I am having a close look at a black FZ16 and I should admit that it is definitely better than the red one… in my opinion though. Before taking a test drive, I wanted to click some photos and I was looking for a nice spot. He told me that there is a university nearby and that would be a nice place to click some snaps. So we took the bike there. So here is the first shot… click the image to have an enlarged view. 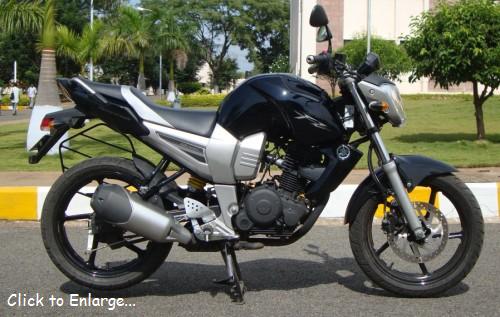 I do not want to comment too much about the looks because each person’s taste differs. But in my personal opinion it is a very descent looking bike and looks much better than other 150cc bikes in the market.

The dashboard is not so appealing and the visibility of the readings is not so clear in bright daylight. I feel it would have been much better if the bike had dials atleast for the tachometer. The tank really looks big and macho, but the real tank is inside, with a 12 litres capcity. All the outside fibre stuff is just for the show off. Alright, now lets get into the performance part of the bike… 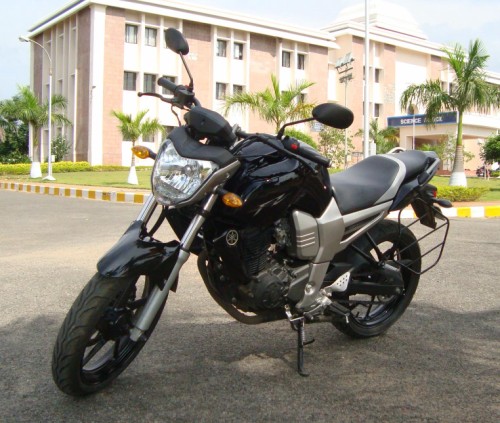 When I took the bike for a ride, the first thing I noticed was the awesome pickup. I took the bike along the short roads inside the university campus and the next thing I noticed was the great stability that the bike has when you take it along the curves. The big rear tyre and the low centre of gravity makes it absolutely easy to ride it in the city roads. As I told you earlier, this is a street bike!

Then the next step was to test the bike in the highways again. The bike performs great in the 20 – 55 kmph range. Great pickup and if you really need, it would give you a tiny bit of adrenalin rush too. But as we have already discussed in previous reviews, the bike is not so great in the 60 – 90kmph range. I was going around 65kmph and I had a truck moving ahead of me in almost the same speed, when I wanted to overtake, I twisted the throttle and was really disappointed… the bike dragged me slowly to 75kmph and the time of overtaking was much more than I expected. Before we go into my final verdict, here is another pic 🙂 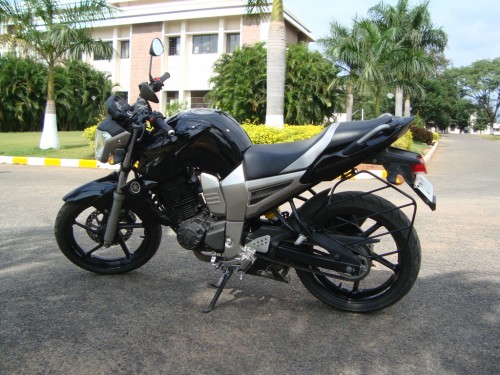 If you really need a high quality highway cruising experience, this bike is not for you. But if you need performance in the streets, even Karizma or R15 won’t come close to the Yamaha FZ16’s performance. And trust me, Yamaha engineers have done a good job in the overall design and specifications by taking into account the need for Indian bikers and Indian road conditions.