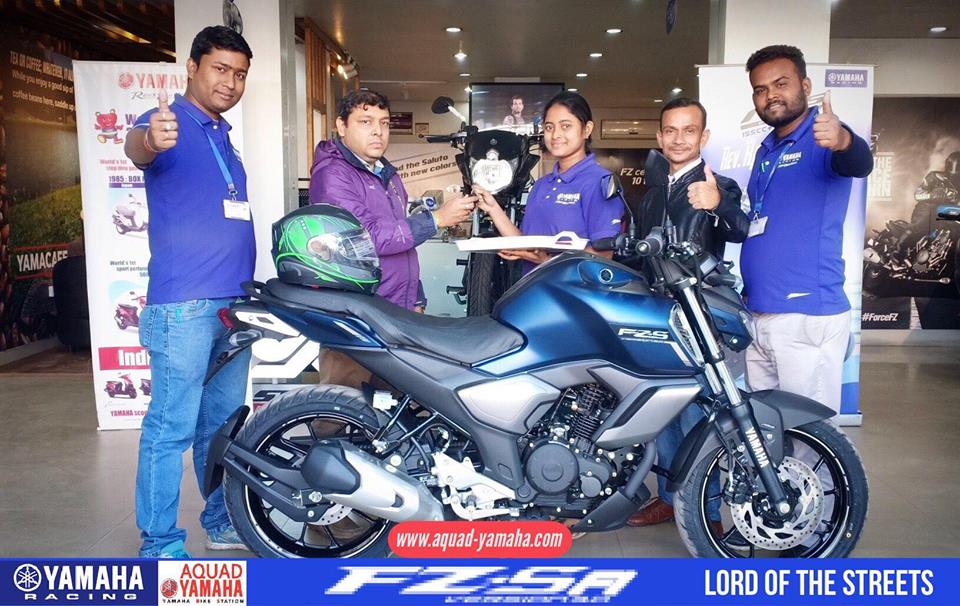 2019 Yamaha FZ v3 deliveries commenced in the first week of Feb but the Cyan colour is not to be seen….

It is applaud-worthy that Yamaha was well prepared with the new FZ version 3. Unlike what many manufacturers have been doing, Yamaha shipped out the updated motorcycle to dealerships as soon as the announcement was made (or prior to that as well). They promised deliveries from February and since the first week of this month, we see that customer deliveries are in full swing at many places.

Pictures on this page from Aquad Yamaha, a dealership in Kolkata confirm the same. Also going by the updates at the page, it appears that FZ-S, the more premium version which costs Rs 2000 more is in higher demand though the difference between the two variants have diminished in the new update. You can click here to know the differences between FZ and FZ-S.

Moreover, it looks like the Dark Matt Blue and Matt Black colour are in higher demand. The third colour Gray & Cyan Blue has not been seen till now – it wasn’t displayed at the launch ceremony and nor have we seen one at any dealership on display or getting delivered. It is a possibility that, for some reason, Yamaha may have prioritised the other two colours for production and this one may come sometime later.

As compared to about 10,000 units of the 150cc FZ range in December 2018, Yamaha shipped over 14,000 units of the motorcycle in the month of January 2019. FZ range, which includes, Fazer 15, FZ and FZ-S, is the largest contributor to company’s motorcycle sales in India. There is a word out there that a more powerful FZ is under works and will be launched sometime later (more details).