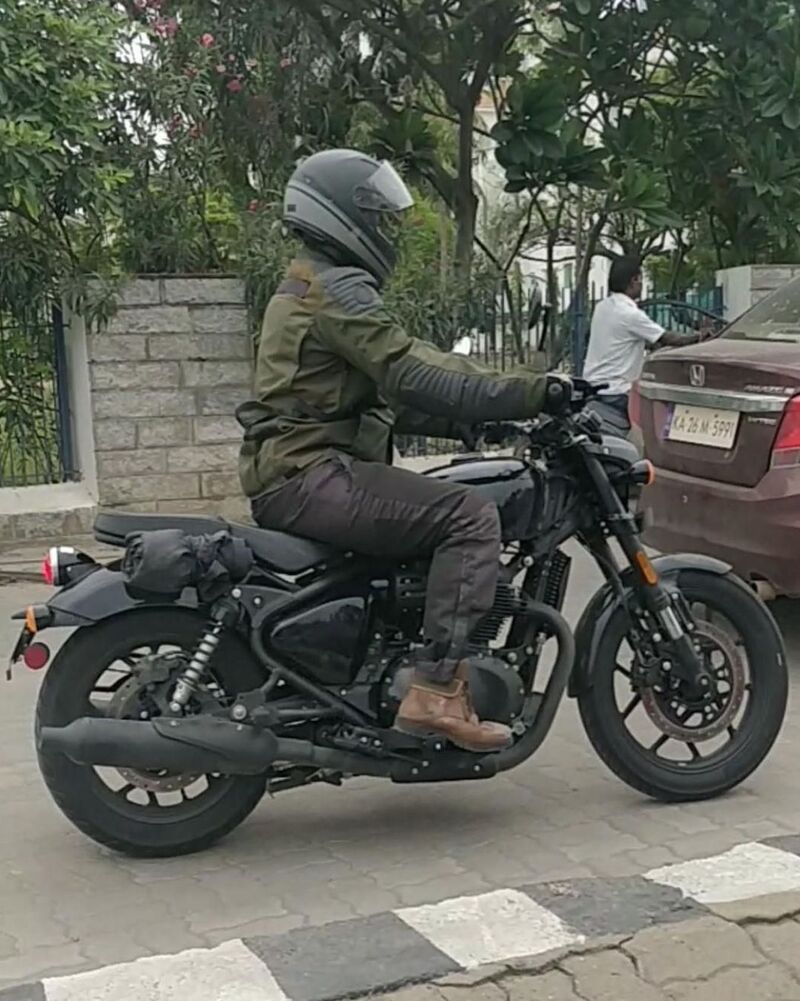 At this point, we have seen so many spy-images of the upcoming bikes from Royal Enfield, that we only need the launch date & pricing and we can share the rest of the details with our readers, ourselves.

This time it is the turn of the upcoming Shotgun 650 cruiser captured being tested with some accessories on board.

2023 Royal Enfield Shotgun 650 Spotted With Some Accessories Onboard

So, the Shotgun is going to be the 4th motorcycle to join the premium 650 cc platform of Royal Enfield. They already offer the Interceptor 650 & Continental GT 650 on this platform in India and globally.

It is expected that by the end of this year, Royal Enfield might release the Super Meteor/Thunderbird 650 to be the 3rd offering of this platform.

Looking at the spy-images shared by an online portal, we can see that there are 2 different models of Shotgun 650 on testing presently. Both these test-bikes are similarly specced but carry subtle changes on them which suggest that there can be multiple variants of the Shotgun 650 – probably base & up-specced models.

The first image shows a Shotgun 650 variant which is decked out in various accessories which could be optioned from the manufacturer. This bike appears to be the base variant, evident by the use of round Ember coloured turn-indicators.

This test-bike is equipped with optional bar-end round rear-view mirrors. These are directly lifted from the company’s optional accessories catalogue and bear their name as well if you zoom into the image. Other optional extras seen on the bike are a large crash bar on which auxiliary lights are mounted. A saree guard is also present on the said test-bike.

Coming to the second spy-image, this test-bike appears to be the upper spec model, as it is equipped with white LED turn-indicators. The most prominent change on this bike is the use of a tiny windscreen, which is we can call a cowl, mounted on top of the LED headlight. This gives the cruiser’s front a slightly taller look and covers the twin-pod instrumentation, offering protection. This bike also carries a large crash-bar at the front and a saree guard at the rear.

Other than these add-ons, both the test-bikes appear to be similar. The hardware – consisting of the USD forks at the front & dual-spring shocks at the rear, Star-shaped alloys, dual exhaust pipes etc., all are similar on both test-bike.

As mentioned earlier, this bike will sit in the 650 cc platform, so it will be powered by the 648 cc, parallel-twin motor producing 47.6 PS and 52 Nm of torque.

It is expected that the Royal Enfield Shotgun 650 will make its debut in the latter part of 2023. It could be priced around Rs. 3.20 Lakh (ex-showroom).