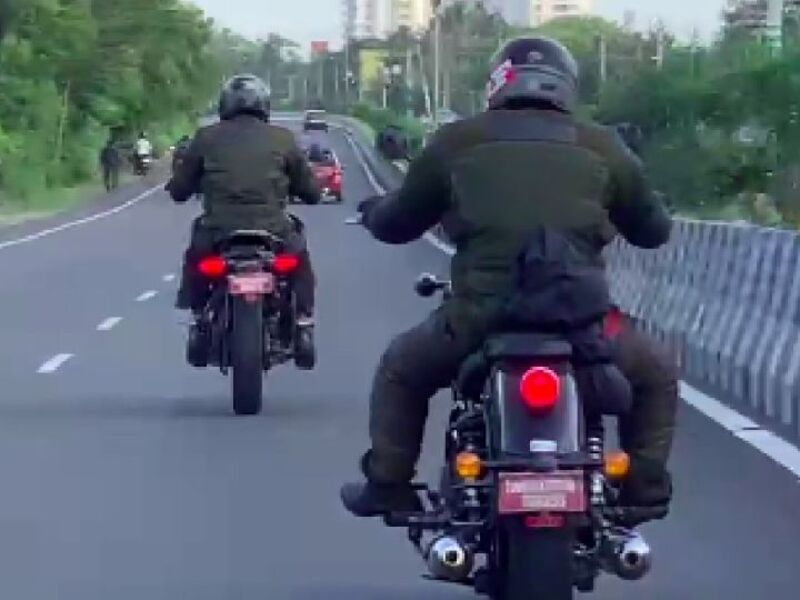 It’s Monday again and we are here discussing the new Royal Enfield offerings, currently undergoing the final stages of testing in India and on International soil.

So, since the past few weeks, many new spy-images have started to float around on the internet showing 2 new models of Royal Enfield being tested industriously on our roads as well as one sighting outside India.

These new images heavily suggest that the new Super Meteor/Thunderbird 650 cruiser bike and the highly anticipated Himalayan 450 ADV are in their final stages of testing.

Starting with the new bigger cruiser offering – the Super Meteor/Thunderbird 650 is one model that has been spied the most in the past many months.

Royal Enfield have recently adopted a method of testing their bikes in pairs and the bigger cruiser has been accompanying various test-bikes on various occasions. The most recent paired sighting has been with the new Himalayan 450 test-bike, and was spied cruising on the highways at high speeds.

The new Super Meteor/Thunderbird 650 will carry forward the design language first introduced on the Meteor 350 cruiser-roadster hybrid but will sport a big road presence. It will be sport a wide hefty body and will ride on the traditional long wheelbase, very reminiscent of the popular Harley-Davidson mile-munchers.

It will carry forward the RE design language of retro, sporting a round headlight, large front & rear fenders, tear-drop-shaped fuel tank, forward-centric foot controls, a rear-swept flat handlebar and so on.

Adding the touch of the modern will be the new 650 cc, parallel-twin motor, semi-digital instrumentation, Upside-Down Forks at the front and their proprietary Tripper Navigation pod. The new cruiser will come with a myriad of accessories and luggage options and could also sport accessory packages very similar to what is introduced on the new Hunter 350.

Let’s talk about the most anticipated and most discussed ADV which is expected to dethrone the mighty KTM 390 Adventure.

Naturally, we don’t have to mention how popular & loved the RE Himalayan 411 is in the Indian biking community, regardless of the quality & mechanical issues it suffers from. Many Himalayan aspirers and owners define their ADVs as a symbol of freedom which allows them to dream of conquering the unrelenting terrain of Ladakh, Spiti & Zanskar Valley.

Look at the spy-images captured of the new Himalayan 450, the first thing you notice is how non-RE is the new ADV’s design while carrying forward the Himalayan 411’s design language.

The rear section of the Himalayan 450 is very similar to the current Himalayan 411 but larger. However, moving forward, the design morphs into something modern. Sticking to the design, step away and you can easily understand that the new RE ADV is sporting the utilitarian design of the modern Adventure-tourer motorcycles.

Step away and observe the new bike as a whole, the inspiration from the Yamaha Tenere 700 is uncanny. The higher front section, the long USD forks connected to a big 21” tyre, tucked-in engine bay design to improve the approach angle of the ADV, and higher seat height, all these elements are inspired by the modern ADVs, especially the T7 and the DesertX.

We can safely say that the new Himalayan 450 could be one of the most capable off-roaders for the masses if executed well and can easily take the fight straight to the segment king – KTM 390 Adventure.

Recently, Mr. Siddarth Lal (CEO, Eicher Motors) himself teased the new Himalayan 450 on social media, posting an image of himself testing the new ADV wading through water crossing up north. This teaser gave us the first glimpse of the ADV sporting a new round LED headlight unit, a small windscreen mounted over it and wide handlebars.

A few days back, one of the biking enthusiasts shared images of the said ADV being tested with hard panniers and top-box in city traffic. This suggests that the testing of the Himalayan 450 is nearly complete and the arrival of the ADV is not too far now.

Finally, it is expected that the Royal Enfield Super Meteor/Thunderbird 650 could be launched during the current festive season, somewhere in October or November.

The Royal Enfield Himalayan 450, on the other hand, is based on a new platform and therefore is strongly rumoured to be showcased at the 2022 EICMA show scheduled in November 2022 in Milan. It is also expected that a new roadster based on the new 450 cc engine could be introduced alongside the new ADV at the Milan show.