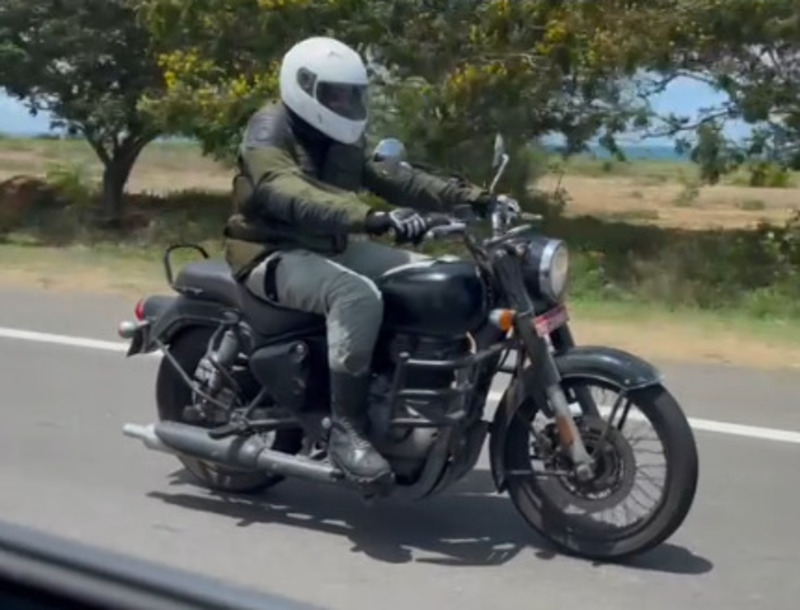 Next-Gen Bullet 350 will ride on a new chassis & engine.. It will come with subtle design changes and new features..

Once again the Next-Gen Royal Enfield Bullet 350 has been captured testing on our rods, but this time up close and clearer.

The new images, from the video shared by an online portal, are clear enough to make out some new details that the test-bike is equipped with, which will separate it from the current-gen model.

This is not the first time that the next-gen Bullet 350 has been spied testing on our soil. The new Bullet has been spied on being tested individually and in pairs with the Hunter 350, which already has been introduced domestically & globally.

The new Bullet 350 will receive a similar makeover as the new Classic 350 sibling. This means it will be built around the new Double Cradle Chassis with the J-platform engine playing its part as a stressed member. The new 349 cc, single-cylinder, air- & oil-cooled engine will be utilised, which produces a power output of 20.2 HP and 27 Nm of torque.

Coming to the design, though the bike is covered in the traditional dark black camouflage as all RE test-bikes are, it is easy to see that the overall design silhouette of the new bike is not that far away from the existing model.

Yet, there are some changes that add a novel factor to the next-gen model. The seat and grab rail design at the rear appears to be designed slightly differently and looks more premium than the current one. The rear lamp has also been replaced by a new circular unit. It is also expected that RE will be adding some unique colour schemes to the Bullet 350 to further add to its charm.

The current-gen Royal Enfield Bullet 350 is priced at Rs 1.48 lakh (ex-showroom). We expect the updated Bullet 350 to be slightly more expensive.

The official launch of the next-gen Royal Enfield Bullet 350 is likely to take place early next year, i.e. 2023.