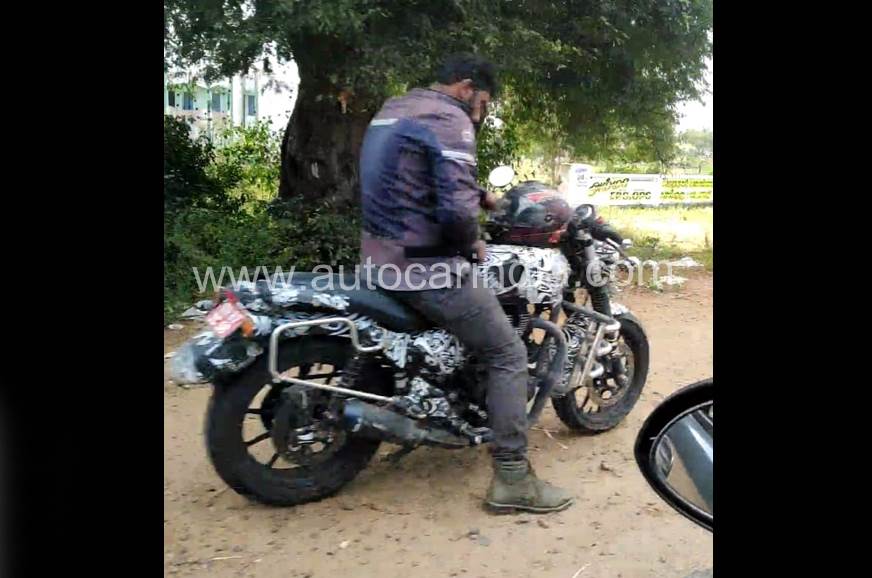 This upcoming Royal Enfield motorcycle could spawn a new brand – Hunter, Sherpa, Thunderbird or something which we don’t know yet!

Royal Enfield is very serious about tackling its sales downfall. Apart from updating its product lineup to meet stringent Bharat Stage 6 emission norms, it is developing new products to bring in freshness in its portfolio and also to rope in new customer segments into its fold.

In a surprising bit, couple of mules of a sporty looking motorcycle have been spotted somewhere in India. This appears to be completely different from any of the Royal Enfields in current production. It is also not one of the purported Classic or Thunderbird test mules that are doing testing rounds down south.

This is a low-slung roadster kind of a motorcycle with slight modern touches, like the Jawa Forty Two. It has proportionate fatter tyres, sloping seat, split grab rails and most importantly an upswept exhaust canister – which is probably a first for a Royal Enfield (apart from the jugaad of the Trials!).

The single cylinder engine appears to be very similar to the one we have seen on the next-generation Classic test mules. The rod type handlebars are positioned neutrally and the footpegs are mid-set.

It is not known which motorcycles are these. Royal Enfield recently filed for trademarks of Hunter and Sherpa (more details) – these could be launched under one of these new sub-brands. Another possibility is that these could be the next-generation Thunderbird X – which could be significantly different from the standard upcoming Thunderbird models.

Apart from the pics of these and its other models, it is all speculative about Royal Enfield at this point of time. But one thing is for sure – a lot is brewing at the company’s headquarters…