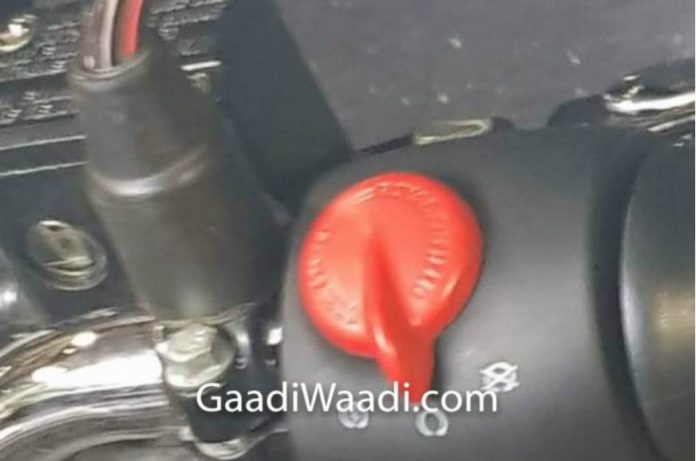 Royal Enfield is exhaustively testing its upcoming 2020 Classic range. These new pics (along with all the other updates that have been spotted earlier) signify that there will be major changes to the mechanicals of the motorcycle. On the aesthetic front, it doesn’t look a lot different from the current version on sale.

Gaadiwaadi has shared new spy pics which reveal the instrument console of the motorcycle. The retro-looking digital speedometer has a small digital console which may showcase some new information apart from what the current RE’s display. Alongside the ignition switch on the left side, there is a circular area on the right which may also be a part of the complete cluster.

On the switchgear front, regular buttons are now replaced with rotatory knobs on either sides which can be used to for low/high beams, engine kill switch, pass etc.

Earlier Rushlane shared the closest-yet spy pics of the complete motorcycle. The new Classic range will get a shorter exhaust, discs on the alternate side (current version has them on the left side) and hence, the chain shifts to the left side of the engine. This is the single biggest reason of believing that the new Classic may get exhaustive engine-related upgrades.

On the outside, the engine looks similar but it is definitely running with altered internals. Cubic capacity of this mule can not be ascertained merely by looking at the externals but the new versions are expected to continue with the 350-500cc combination. There is no kick starter either and the front headlamp (which was expected to get LEDs) is running on a regular halogen bulb. We can also spot the new foot brake lever in these pics.

In an earlier spotting shared by Motoroids, the 2020 Classic was spotted with accessories such as a large wind-screen, saddelbags, pillion back-rest (from the Thunderbird), crash guards etc. The seating also appears to be altered – looks better finished and may be slightly more comfortable.

Get Ready for Royal Enfield METEOR

It also gets minor differences in rear shock absorbers and tail lamps. Launch, as we believe will be around or slightly earlier than April 2020, which is when the BSVI emission norms kick in in India. Apart from this, the first test mules of the 2020 Thunderbird have also been spotted – spy pics here.

Is This First Ever Spotting of TVS CREON?

Activa 5G to be Discontinued; New Activa 6G Deliveries by This...