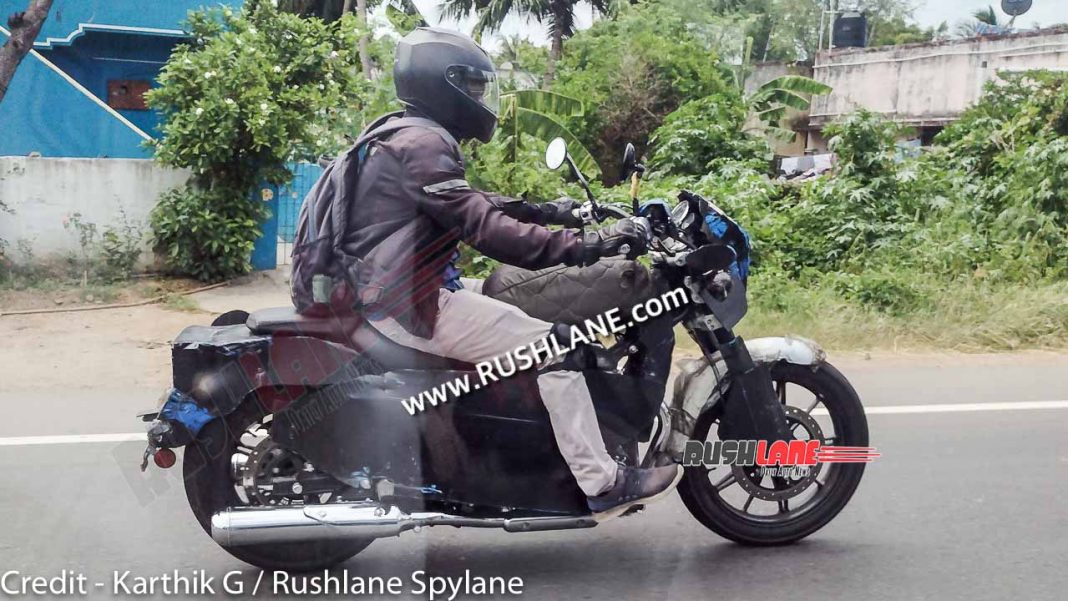 Upcoming RE 650 cruiser will offer a typical open-chested, foot-forward riding posture along with the twin-cyl engine…

Yet again a big cruiser from the Royal Enfield camp has been spotted doing test runs on the Indian roads. Its design seems to be inspired by the KX bobber that was showcased at the EICMA 2018. More importantly, this upcoming cruiser is running on twin cylinders that means it, in all probability, packs the same 648cc twin-cylinder engine.

This upcoming bike will join the 650cc lineup of Royal Enfield which currently has the Interceptor and Continental GT.

From the spy images, it gets clear that it packs in a muscular fuel tank and those twin exhausts are positioned flat.

Also, the pictures reveal ABS (most probably dual channel), USD forks, alloy wheels, tripper navigation meter along with the primary meter console which may have a digital panel as well. It comes with a typical cruiser-like open-chested seating posture with front set footpegs.

It is expected to share the same motor that currently churns 47bhp of power at 7250 RPM and 57 Nm torque at 5250 RPM. However, there will definitely be tuning differences because of the new application.

Considering the current 650cc line-up expect this cruiser to be priced at around Rs 3 Lakh or thereabouts. RE is all set to bomb the market with many new products as its CEO has already confirmed. Its lineup 2 years down the line will be an interesting sight to watch.