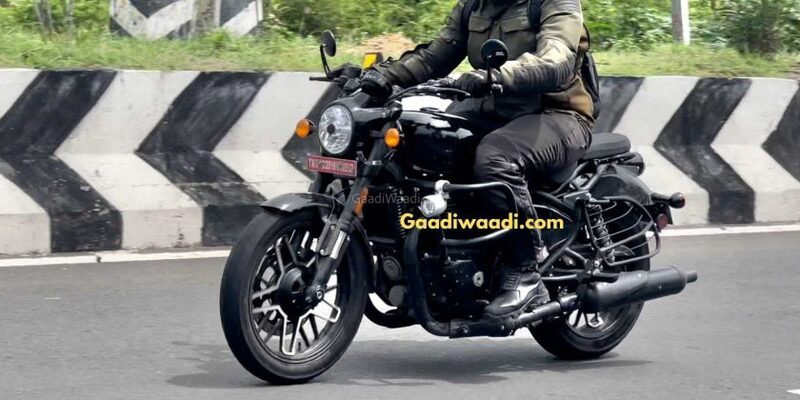 Boy!! Royal Enfield is working hard on testing their upcoming models. And we have been keeping pace with them, constantly reporting sightings of various RE test-bikes that have been spotted in various instances.

Yet again, we are reporting the sighting of Royal Enfield’s upcoming cruiser based on the SG650 concept being tested on our roads.

Upcoming Cruiser based on Royal Enfield SG650 Concept on Test

At present, we are confident to say that Royal Enfield is hard at work to finish testing at least 2 new models in their 650 cc platform. Earlier, we reported and shared images of production-ready Super Meteor/Thunderbird 650 undergoing its final stages of testing in our city environment.

Now, this time we have seen the 2nd offering that will be unveiled later in the timeline, in the 650 cc platform, and it will be a cruiser based on the ‘SG 650 Concept’ that was unveiled globally at the 2021 EICMA event last year.

Also read: 2022 TVS Ronin Cruiser-Scrambler – Everything You Need To Know

The second cruiser which, for a while now, is being speculatively referred to as ‘Shotgun 650’, has been spotted for the 3rd time in the last 4 months. This cruiser is the only model, among the bikes being tested,  which has also been spotted testing on International soil, about which you can read our report here.

Comparing the clear images captured internationally and the ones being shared today, we can make out a lot of details about the upcoming Shotgun 650.

Looking at the overall design, we can easily see that the new Shotgun 650 will be another cruiser with some design elements of a roadster melded into it. This cruiser-roadster hybrid design will allow the bike to have better riding dynamics in both – urban environments and long highway haul.

It continues to sport the Royal Enfiled staple – retro design language. The retro theme continues with the use of a teardrop-shaped tank, round headlights, indicators & tail light, round rear-view mirrors, minimum body panels and more. There is also minimal use of chrome to add a premium finish to the fuel cap and tail-lamp surrounding.

Adding the modern touch to the retro cruiser is the use of Upside Down (USD) forks at the front, LED headlight unit and semi-digital round instrumentation coupled with a small Tripper Navigation pod. We can also spot various accessories being used on this test bike – Auxiliary lamps in white colour mounted on the Crash bars.

Finally, the upcoming Shotgun 650 will be powered by the same 648 cc, parallel-twin, air & oil-cooled SOHC engine that is powering the existing Interceptor and Continental GT siblings.

This motor produces 47.65 PS of power and 52 Nm of torque connected to a 6-speed transmission aided by a slipper clutch as standard. However, we are expecting a change in the tuning and power delivery of the engine to match the characteristic of the cruiser.

To the best of our understanding – Royal Enfield will be launching their most affordable Hunter 350 roadster in India in August 2022, which will be followed by the introduction of the new Super Meteor/Thunderbird 650 cruiser. So, Expect the arrival of the Shotgun 650 somewhere next year.

And Oh!! Don’t forget about the Himalayan 450 and the alleged roaster bike based on the 450 cc platform as well.