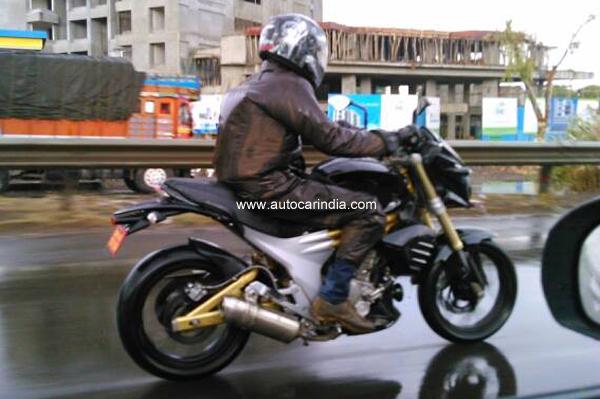 Mahindra Mojo is possibly the only bike which has been updated even before it is released for sale. Remember, BikeAdvice was the first publication in India which revealed the redesigned Mojo in exclusive spyshots in January 2014 (here & here).

Later on, at the Auto Expo, Mahindra officially pulled the wraps off the new muscular Mojo, with a surprise – Mojo Race version (pictured below)! In these new clothes, Mojo does look better than the old one but we still do not have any words whether there are any changes in terms of its output.

The Mojo, when it was first unveiled way back in 2010, pumped out official figures of 26PS of power and 24Nm of peak torque. The bike was to be a segment first in many ways but has, unfortunately, been plagued by long delays. Mojo is finally believed to be launching this July and now Autocar India has come up with a new spyshot of a test mule from somewhere near Pune.

The uncamouflaged test mule gives us a further proof that the Mojo is almost production ready. This is the first time it has been snapped with its new headlamp and gill shaped radiator blanket.

The seating position is upright and by the overall look of it, it appears that Mahindra will promote it as a sports tourer. Keeping in mind the long duration which Mahindra took to fine tune the Mojo, a slight boost in power can be expected.

Indian manufacturers finally seem to be accepting the global trend of upside down forks on the front and a monoshock at the rear. The twin exhaust on either sides also looks imposing, while the golden swing arm and twin chest rods at the front add to the muscularity of the motorcycle.

The redesigned tank with knee recess makes the bike look ‘healthier’ and lends that sporty feeling. The neatly arranged rear end looks nice with a tiny mudguard and even tinier tail lamp. Though we are yet to hear anything concrete from Mahindra, any further delay would mean even more competition it will have to face.