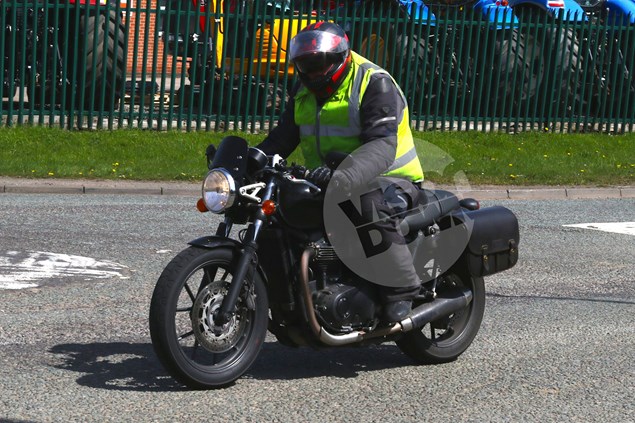 Update 12th May: A new spy shot of a Triumph-like motorcycle has come up thanks to the folks at VisorDown which can possibly be the Street Cup. The cafe racer gets the seat, instrumentation and head lamp from the Thruxton but most of the body has a clear resemblance with the Street Twin. New components include a floating front brake, sportier exhausts and a new handle bar. We expect the Street Cup to hit the streets sometime next year.

The best thing about Triumph is that it has been able to maintain the true spirit of their classic models even with the introduction of modern technology/motorcycles. With the new Bonneville range available for sale in most of its markets, things look good. In fact the reception to the first ever water cooled engine series has been more than encouraging. The new bikes have even gripped the Indian motorcycling community by storm and enthusiasts are eagerly waiting for the new Thruxton to hit our shores.

However, that’s not all. Triumph has not one but two more motorcycles to be added to the Bonneville family. The first being the new T100, which was spied recently. This is a smaller capacity version of the T120 with the new 900 cc high torque mill from the Street Twin which produces 80 Nm of peak torque at 3,200 rpm. In comparison the previous generation T100 with old 865 cc mill churned out 68 Nm at 5,800 rpm.

The second is the Street Cup! Yes, another new Bonneville. Emission figures of upcoming motorcycles posted by California Environmental Protection Agency reveal the name of this new bike. This too gets the same 900 cc parallel twin mill. However, the name is where the mystery lies. Is this the Bobber version which has been spied in the past? Or is it something entirely new which we have not seen so far?

We expect both the T100 and Street Cup to get the standard features of the new Bonneville range which includes slipper clutch, traction control, ABS and ride by wire. In terms of pricing the T100 can be expected to be placed between the the Street Twin and the T120. The Street Cup is a mystery here. Expect things to get clear by EICMA.