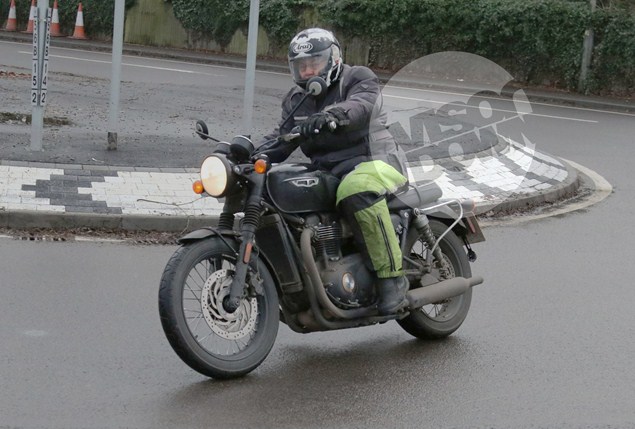 Looks like Triumph is still not done with the Bonneville range. While the British motorcycle brand unveiled a new range of bikes last year which includes the Street twin, T120 and Thruxton, they seem to have one more card left. The T120 and Thruxton house a bigger 1,200 cc mill, the former gets a smaller 900 cc parallel twin engine. Visor Down now claims that the company seems to be getting ready to bring an entry level version of the T120 with the smaller motor!

The report claims that apart from the engine the test unit also gets the front suspension from the Street Twin. If we talk about output figures the engine with a 270 degree firing interval produces 54.3 bhp of maximum power at 5,900 rpm and 80 Nm of peak torque at 3,200 rpm.

The spy shot also reveals the presence of a single disc at the front unlike the double disc layout in the T120. The exhaust canister though bears the shape of the one seen in the T120. Expect other standard features of the range, like ride by wire, ABS, slip and assist clutch and traction control to be present in the new bike as well. It is however not clear if the bike will be getting the riding modes (road and rain) from the T120.

So why does Triumph need this new offering? The bigger hearted T120 carries a significantly high price tag. A smaller engine which is Euro 4 compliant and has ABS will be a more fitting replacement of the present generation T100 which can no longer be sold in Europe from next year due to stricter emission norms. A cheaper T120 will thus allow them to target a broader spectrum.

Closer to home, Triumph India has recently announced that they will be launching the new Bonneville range at the upcoming Auto Expo.