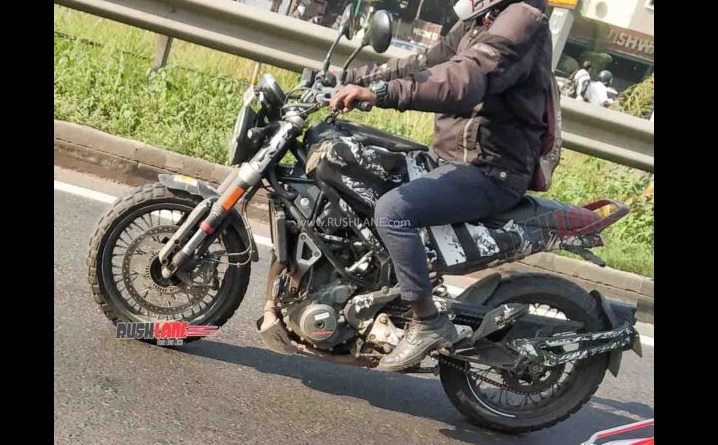 Svartpilen 401 launch very soon (along with sibling Vitpilen 401). The motorcycles share most of the components with KTM counterparts and will be priced lower than them.

In a latest development, one of the 401 twins – a Svartpilen, was spotted testing outside Pune by an automotive enthusiast – Padmasinh Patil. You can spot the KTM badging on the engine of the test mule. It is to be noted that Husqvarna is an entirely owned subsidiary of KTM Group, which in turn, is 48% owned by India’s auto-major – Bajaj Auto. Bajaj manufactures both – KTM and Husqvarna branded motorcycles at its plant in Chakan, Pune.

Now this means that Husqvarna 401s will also share most of its components with its KTM counterparts, just like how the 250 cc variants do. The motorcycles will borrow the same 373.2 cc, single-cylinder, BS6-compliant, liquid-cooled engine that produces a peak power of 44 PS and 37.5 Nm torque. We can see the same motor on various models, including KTM RC, Duke, and Bajaj Dominar 400.

Apart from the engine, several other components like USD forks, adjustable mono-shock at the rear, trellis frame structure, brakes, etc., will be carried over from the Duke 390. The India-spec model is seen sporting the mandatory grab rail.

When launched, the motorcycle is expected to be priced a little lower than the KTM 390s, as is the case with its 250 cc counterparts. For reference, the Duke 390 is priced at Rs. 2.58 lakh. So expect something around Rs 2.30-2.50 Lakh for the Huskies!

According to a revealed document, KTM is scheduled to launch the 401s in India within this year that means we may be just a few weeks away from their official introduction here (details here).