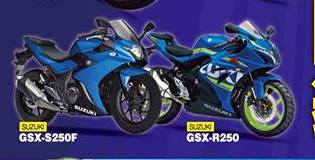 Post the Inazuma debacle, Suzuki India got the sales kicking with the naked Gixxer. Following up its success was its faired version. And now the Gixxer family has also got a rear disc and fuel injection. The next big thing is the rumoured quarter litre motorcycle, mystery of which is getting baffling every passing day.

The trail became more interesting with the emergence of new spyshots of another motorcycle in Indonesia recently (which they believe is a 150cc!). To make things puzzling Japanese motorcycle magazine Young Machine has added more fuel to fire by claiming that Suzuki may/will have not one but two new 250 cc sports motorcycles!

In this latest rendering which you see above, they have shown two motorcycles one of which is the GSX-R250 and the other is termed as GSX-S250F. The S250F is from their ‘S’ range which is the more road-going version, naked flagship of which we tested recently (read review of S1000). The R250 is shown as the supersport sibling which everybody must be really excited about. The GSX-S250F seems very close to the first spy pic which emerged last year (see here). Two motorcycle theory also goes in tandem with our story where we have expected two upcoming motorcycles based on the test mules that have surfaced so far…

They already have the very relaxed 248 cc twin-cylinder motor of the Inazuma which can be plonked in at least one of these with the obvious performance tweaks. Hopefully, we will be able to understand Suzuki’s gameplan in the 250 cc segment after Intermot and EICMA in October and November respectively.