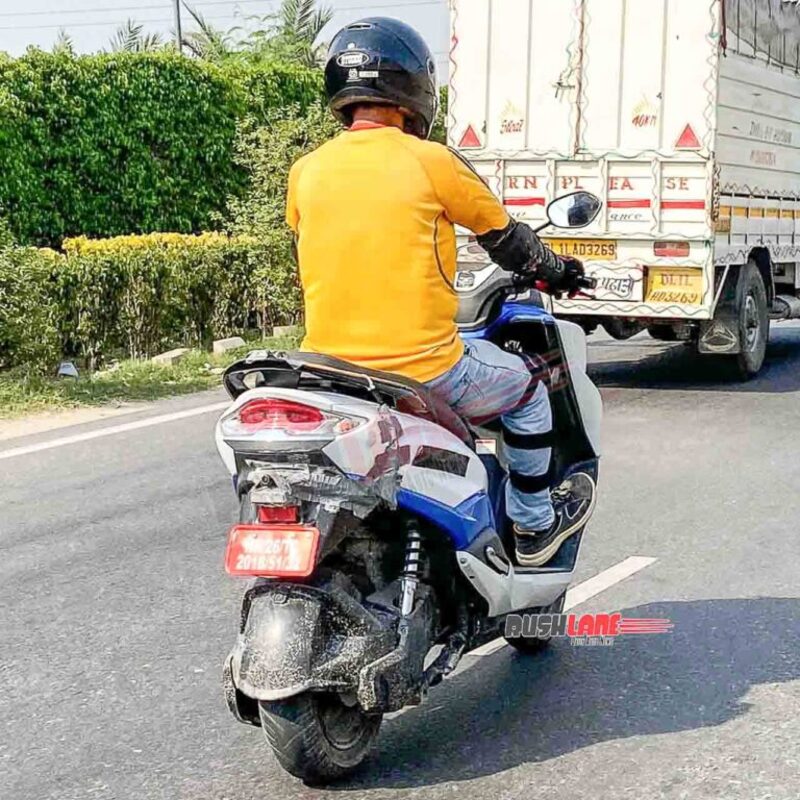 So, it has been a while now that Suzuki India have been working on their plan to enter their own electric scooter competitor in the rapidly growing EV market of our country.

It was back in 2020 that we saw the first glimpse of what Suzuki have started working on. We brought the first exclusive spy-images of a White with Light Blue coloured electrically powered Suzuki Burgman being tested on our roads.

Now coming to the present, very similar images have been shared by an online portal showing an Electric Suzuki Burgman, donning the same paint scheme as previously spotted, being tested on our roads.

This time again the electric scooter from Suzuki India has been captured undisguised. The one feature that jumps out is the absence of an exhaust canister which differentiates it from the petrol-powered model and solidifies the assumption that it is electrically powered.

Furthermore, according to some patents which surfaced last year, Suzuki might be utilizing a unique method of transferring the power from the electric motor to the rear wheel.

Conventionally, the manufacturers combine the electric motor and the swingarm in order to make it a single unit to transfer the power to the rear wheel, thus creating a lot of space in the chassis for storage purposes.

However, if the leaked patents are indeed genuine, Suzuki might be ditching the convention and will be mounting the drivetrain under the seat and will be connecting it to the motor using a chain as the final drive.

Another small difference we can see is the use of twin rear shock absorbers instead of single shock absorber used on the Burgman Street 125. It is safe to assume that this change has been !ade to compensate for the increased weight due to addition of batteries into the powertrain.

As of now, Suzuki India have divulged no information regarding their EV plans in and for India. If whispers are to be believed, the electric test-scooter could be powered by a combination of 3-4 kWh battery pack and 4-5 kW electric motor.