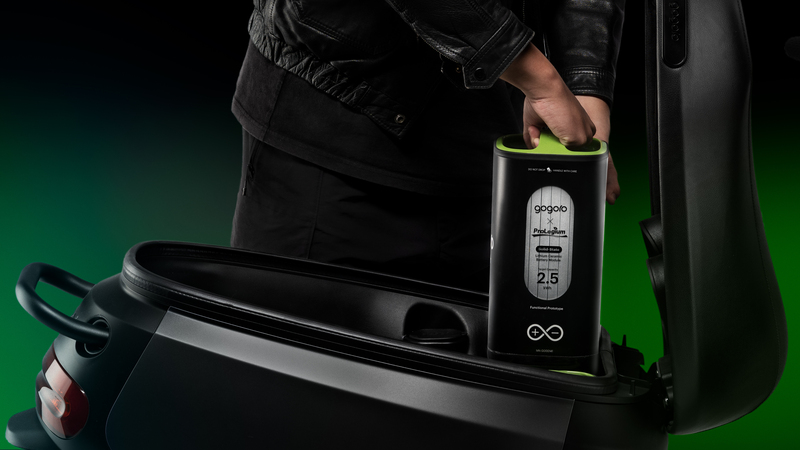 To us in India, the name ‘Gogoro’ came into our radar when Hero MotoCorp announced their partnership with them in April last year. Hero is working on their plan to utilise Gogoro’s expertise in swappable battery technology to provide a better alternative to wait-&-charge. It may be intending to provide a large network of battery swapping infrastructure for its electric scooters.

However, in the EV world, Gogoro have been working hard on creating an alternative to finding power-plugs or charging stations and attaching/removing cables for charging the electrically powered vehicles. They have produced over 1 Million of their lunchbox-sized batteries that can be swapped within seconds from their thousands of quick swapping stations. They are primarily working on facilitating ‘light’ EVs such as scooters and motorcycles.

But who is Gogoro??

Etching  another mark in the EV history, Gogoro have unveiled the very first solid-state swappable EV battery prototype to the world. The new and revolutionary battery has been co-developed with ProLogium Technology who are the solid state battery industry leader with expertise in Lithium Ceramic Batteries (LCBs).

The new solid state Gogoro battery pack prototype, which is still under development, is said to have boosted Gogoro’s current capacity by nearly 40%, hiking it from 1.7 kWh per battery to an impressive 2.5 kWh. And more important than this, the company claims that the solid state batteries have a big advantage over the Li-ion battery – they are virtually Fire-proof.

The company explains that in LCBs, the thin yet hard ceramic layer makes it impossible for dendrites to puncture the plastic separator which actually is the leading cause in the rare yet horrendous lithium-ion battery fires. This allows the new batteries to charge quicker, with ProLogium mentioning figures like 12-minute charge times in the past.

“Gogoro is unveiling the world’s first solid-state battery for two-wheel battery swapping because it’s imperative we take advantage of the latest battery innovations to introduce a new era of electric transportation growth and adoption in our cities,”

“We partnered with ProLogium Technology, a global leader in solid-state battery innovation, to jointly develop this new battery that delivers higher energy density for better range, improved stability and safety, and is reverse compatible with all existing Gogoro-powered vehicles.”

It is very promising to see and understand the constant improvement and development of various means of charging technology which will slowly add up in time to offer solutions for charging anxiety we all are going to face once the adoption of EVs accelerates even further.

In our humble opinion, battery swapping is a better option than plug-in charging and waiting for hours for the vehicle to power-up. It is very similar to our present habit of getting re-fueled at the petrol-pumps, which takes mere minutes.

Hero has recently announced Vida branded scooters that will start hitting our shores from July onwards. However, it will be interesting to see if battery swapping will come on Hero’s own products or the ones that it will jointly develop with Gogoro.