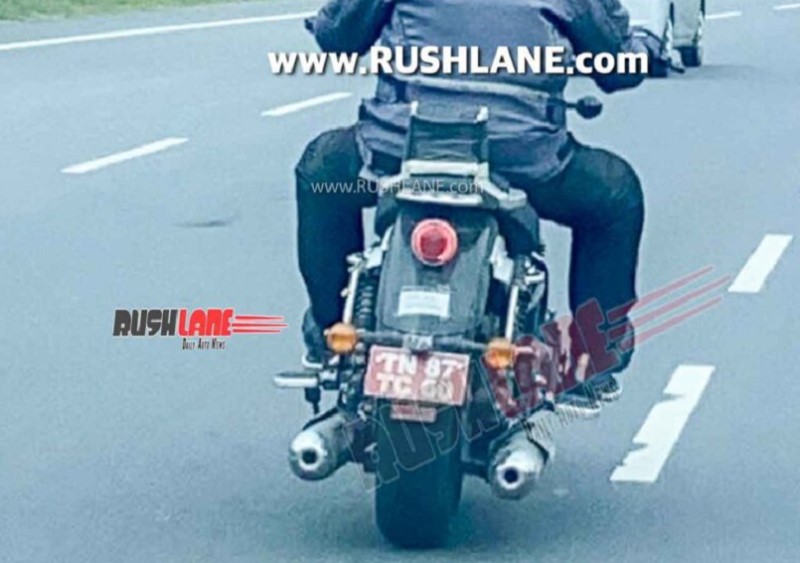 Surprise surprise! RE 650 cruiser may come in two or more different versions. This current one looks different from the older spotting…

It looks like the bike will be available in multiple options that offer different ride dynamics.

Royal Enfield recently announced that it will be launching at least one model every quarter, and it appears that the company is walking the talk. Apart from introducing the Meteor 350 on an all new platform, there are a lot of other models under test. One among them is this upcoming 650 cc cruiser that has been snapped earlier as well.

The bike may draw its inspiration from the KX Bobber concept that was showcased at EICMA in 2019. In the latest spotting, we get to see the bike with an added accessory – the pillion backrest.

It is to be noted that the bike in the previous spy pictures did not sport this backrest. Apart from that, previous images revealed typical, feet-forward, cruiser like riding position. However, the latest images reveal the rider to be sitting with a more conventional riding posture with feet straight downward. The foot pegs are towards the center, rather than forward.

Another RE Caught Testing: Is It The All-New Classic 650…?/

These differences suggest that the company may either be working on the rider geometry or there may be more than one variants in the plan – like the surprise of the existing 650s that eventually turned up into Continental GT and Interceptor 650. This could then cater to different tastes.

Whatever be the case, we expect the motorcycles to share the same 648 cc, parallel-twin cylinder engine that is also found on the current 650 Twins, that produces 47 bhp of peak power and 52 Nm torque, and is mated to a six-speed gearbox.