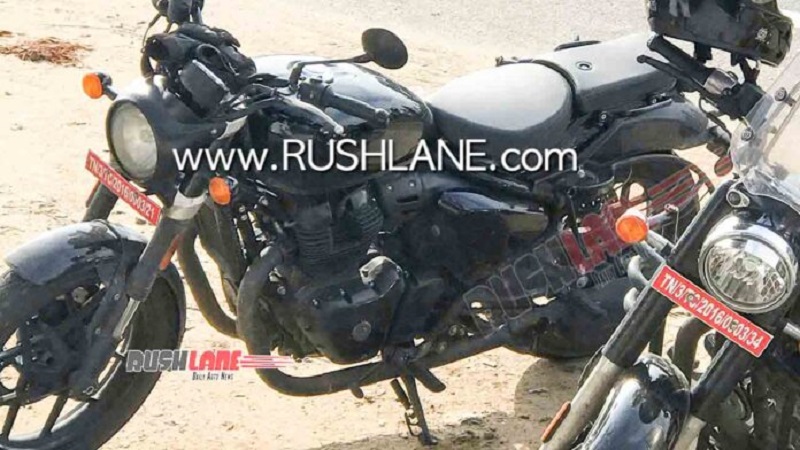 Are these first Classic 650 spy pics? The new spied model gets alloy wheels and twin exhaust. It has been spotted alongside the Next-Gen Classic 350…

Royal Enfield’s Classic 350 is the most popular and highest-selling motorcycle in the segment. With the next-generation platform ready, it is obvious that the Classic will also move to it. And the same has been spotted testing again. But that is not the surprise here.

The surprise is the new twin cylinder motorcycle that has been snapped alongside it. We have always known that Royal Enfield has been working on developing 650cc motorcycles with the twin-cylinder engine and platform of the Interceptor 650. However, it will also spawn a Classic 350 like motorcycle is something new.

By looking at the images, both the motorcycles look quite similar to each other in terms of design, as both of them get circular headlamps, split seats, tear-drop fuel tank, black alloy wheels, and front and rear disc brakes.

Apart from that, the Classic 650 (if it is one) gets a tall, adjustable windshield, Upside-down (USD) forks, single pod instrument cluster, crash protector, and large profile tyres.

On the mechanical front, the motorcycle is expected to share its engine with the other 650 cc siblings, which is the 649 cc, air and oil-cooled, parallel-twin motor that produces maximum power of 47 bhp and peak torque of 52 Nm. The engine is mated to a six-speed gearbox. However, it is not clear yet if there will be any change in the tuning of the motorcycle.

If you recall, the company used to sell Classic 500 in the country, which was discontinued recently. The new Classic 650 could be the replacement for the Classic 500.