The mashup of DSK-HYOSUNG has been providing Indian bikers with suitable choices in the parched segment between the quarter-litre and the full-blown litre class. Its cruiser offering GV650 aka Aquila Pro as well as the sportier GT650R have received warm and enthusiastic responses. 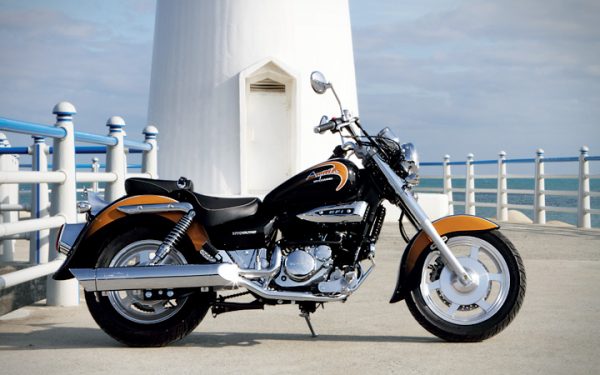 Some issues continue to dog this Indian-South Korean joint venture. The most tenacious of them has been the pricing of their products. They have an existing assembly line at Wai near Pune, as well as a newly acquired one at Karad in Maharashtra.

According to the company, their prices will go southwards once they hit peak production at both the plants. Another lesser worry for Hyosung was the absence of a premium feel and refinement as compared to some other bikes like the Kawasaki Ninja 650. However, the 2013 iteration of the GT650R seems to have an answer for that!

Nevertheless, Mr Shirish Kulkarni, MD of DSK Motowheels, has big plans to take the game higher. A few days back, he had announced the ongoing work on a 125cc bike that will enter the Indian market (Read Details). Now, Autocar reports that DSK Hyosung is preparing their next steed for India, the fabulous GV250! 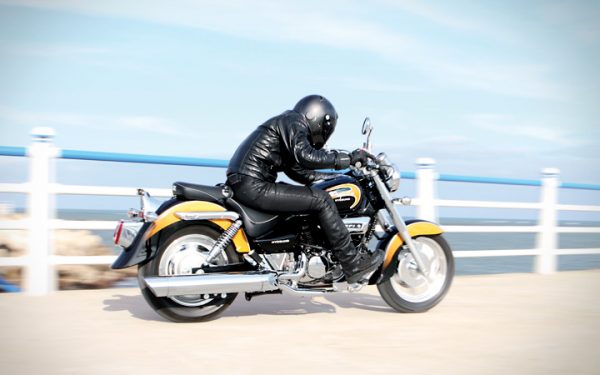 Hyosung had introduced the seductive 250cc Aquila cruiser into the Indian market way back in 2003 with Kinetic. The cruiser was no exception to the big-bike theme of Hyosung, and it had a generous application of chrome all over it. Only limited numbers of around 200 were brought into India.

Despite being a quarter-litre machine, the GV250 projects the image of a big butch cruiser in all respects. The round headlamp with the chrome rim fits perfectly into the scheme of old-school styling, and the chrome handlebars as well as the mirrors too add to that impression.

The GV250 sports a humongous fuel tank with chromed tank shrouds. Much of the profile’s front section is occupied by the mill as well as the radiator, lending more of a bulky feel. Needless to say, “chrome” is the word as the bike gets draped in it! 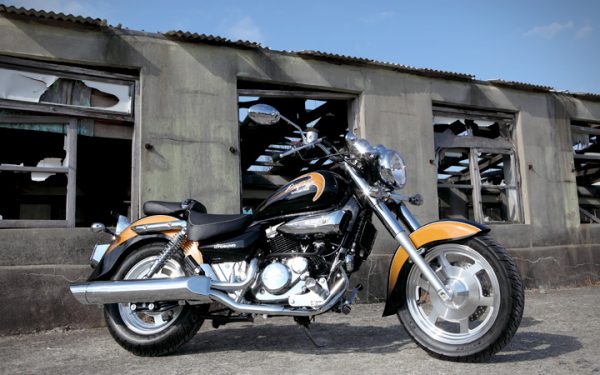 The cruiser look is completed by the low-slung rear section. The long, sleek glimmering exhaust pipe shines in all its glory and a typical bellowing grunt of the V-Twin nestled in the frame is expected. This V-Twin is a 249 cc oil-cooled, fuel-injected mill that pumps out a maximum of 28 bhp approximately. The 8-valve engine is mated to a 5-speed tranny, and will transfer power to the rear wheel via a chain drive.

As of now, the details on the launch period are still hazy but expectations of a 2013 launch are ripe. DSK-HYOSUNG could be looking to bring this cruiser by the year end via the CKD route. There is also no information available about the pricing but we expect it to be priced lower than the sports GT250R.

This cruiser will be a highway mile-cruncher, with a super-relaxed riding position as well as wide, comfy handlebars. The. V-Twin mill will putter around at highway speeds, without throwing around much tantrums, and it will obediently respond to your periodic “adrenaline surge desires” too.

Do you think finally there is a competitor for the 350cc models of Royal Enfield?

Also Read: List of all 7 Upcoming 250-500cc Motorcycles in India