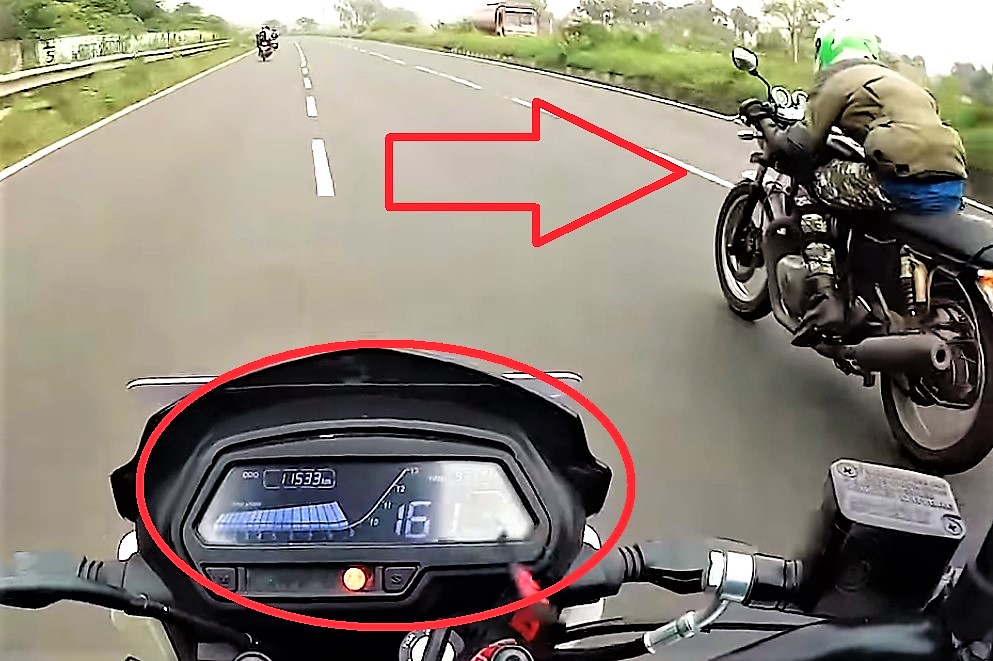 RE 750 Twin launch early next year; Unveiling Expected at EICMA…

Continental GT is fizzling out in sales in India. But the bigger issue is the Himalayan, which apart from not doing expected business, is plagued with truckloads of very serious issues. To iron them out, Royal Enfield stopped production of the motorcycle (after selling it for about a year) and has relaunched it with fuel injection. This has created grave concerns over Royal Enfield’s next motorcycle – which is rumoured to be called as Interceptor 750. Many people believe that if the Chennai-based brand can not master a simple single cylinder engine (on the Himalayan), will a twin pot will be a Pandora’s box of problems?

This will only be known once the twin, RE’s first after four decades, will be put to use by bikers after its launch. But what has been unleashed is the fact that Continental GT 750 or whatever motorcycle the twin cylinder spawns, will be fast, by RE’s standards. After the motorcycle was caught on video in a chase with Duke 390 (discussed later), we have a new spy video of a Dominar 400 trying to keep pace with RE’s upcoming twin.

However, on the contrary, when you factor in that this RE is running a twin cylinder engine in the vicinity of 700-750 cc (yes, it has NOT been confirmed still), double the capacity of Dominar 400, you may still say that much better performance is expected out of it.

Apart from this, appended on this page is a spy video of the CGT 750 in a high speed chase by a KTM Duke and pictures of the twin doing testing rounds somewhere in South India. Pics credit – Team-BHP and BikesIndia. ABS Pics credit Biker Buoy. 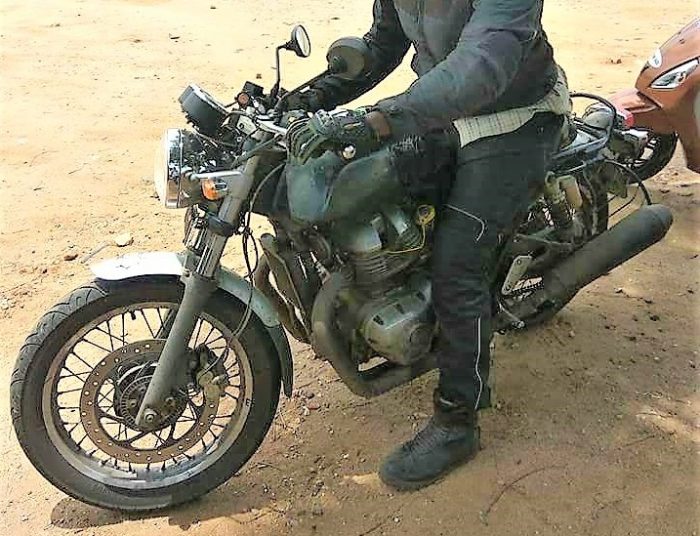 The rings on the front tyre confirm the presence of ABS and it is expected to be a proper dual-channel ABS system. The sensor wire can be clearly seen in the pic above and this particular mule was spotted somewhere in Tamil Nadu. 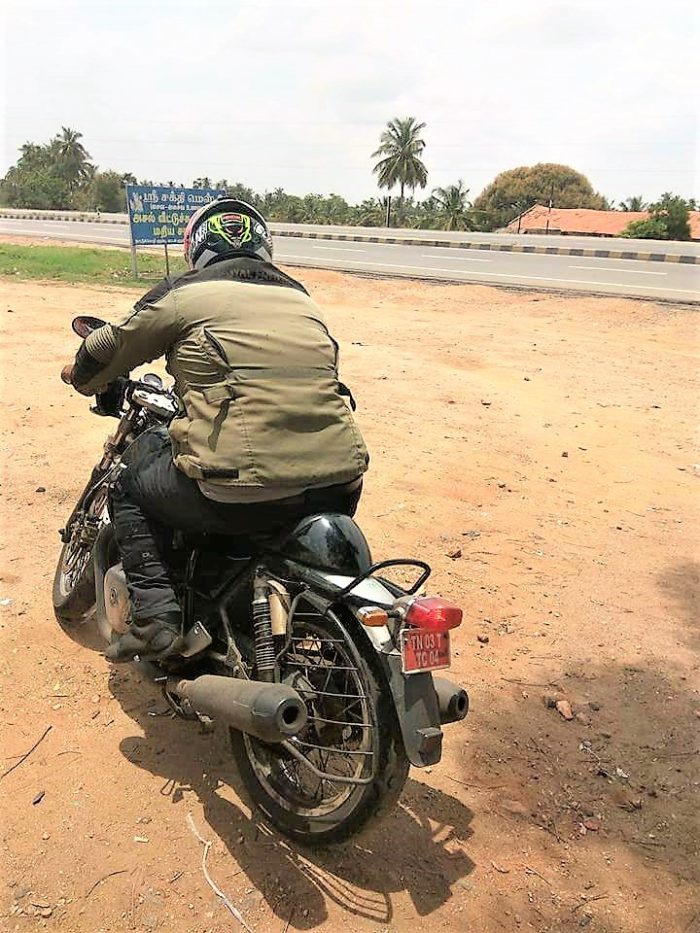 The Duke, in the following shaky video, crosses 155 kph couple of times but CGT Twin continues to run ahead of it.

Mr Siddharth Lal, head of RE, has said multiple times that the motorcycle will be highway-friendly and worthy as it will pack in more power. He believes that it will also give the company some traction in markets which are faster than India and consider REs too slow for their roads. 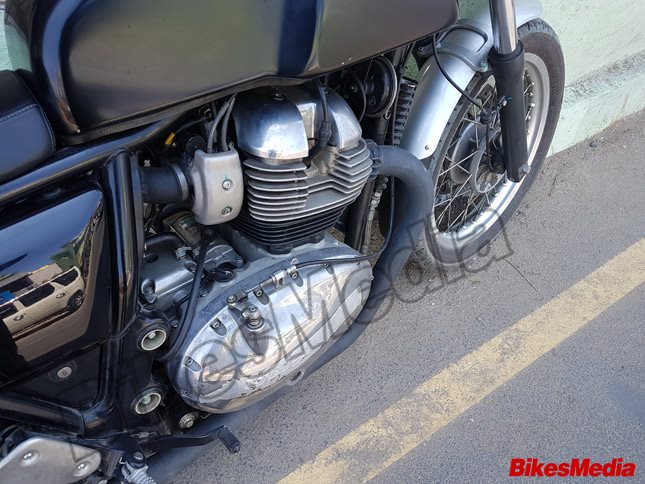 For some reason, the Continental GT 750 mule appears to be running on similar sized (130 section 17 incher) rear tyre. We expect(ed) them to be broader to handle more power. 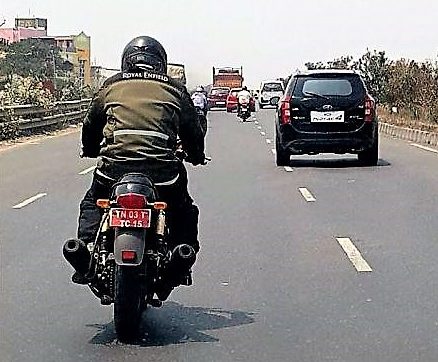 Notice that there is no symmetry between the two exhaust canisters. They are jutting out irregularly and appear to be roadside jugaad mods! We hope it is not a similar case on the production model. 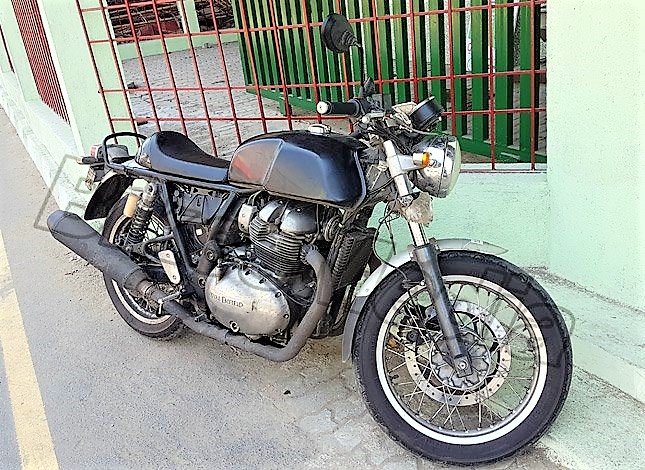 Continental GT 750 will get a parallel twin near 750 cc engine but it will be air-cooled (with oil-cooling), against the liquid-cooled motor of the Harley Davidson Street 750. Power is expected to be around 45 bhp and we estimate the torque output to be between 60-65 Nm. These are definitely Street 750 rivalling figures but expect Royal Enfield to price it much lesser than the entry-level American!

In an interaction with NDTV, Royal Enfield’s chief Siddharth Lal has hinted that the motorcycle will be unveiled by the end of this year. There is a strong chance of the company leveraging the EICMA hype by unveiling the motorcycle at Milan Auto Show which is scheduled from 7th November till 12th November.

And its launch is expected sometime in the first half of 2018. We have already seen a different Retro Classic version on tests (spy pic here) and we believe it is the more correct way of utilising this new motor (rather than a cafe racer!). 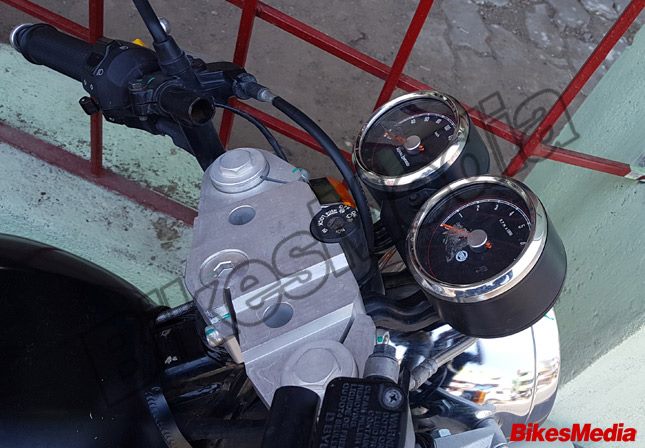 This is a massive step by Royal Enfield and they will be venturing into multi cylinder engines after at least four decades. But we just hope that they thoroughly test it up before letting the product out for motorists, unlike Himalayan, customers of which feel surprised if their motorcycle does NOT report issues after completing few thousand kms!