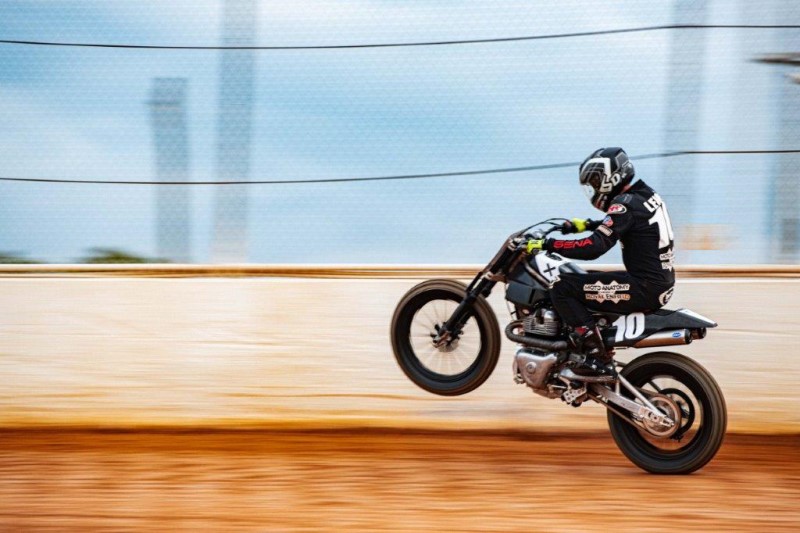 RE 650 FT Twins has been developed for flat track racing competitions. It is based on the company’s Interceptor 650…

Royal Enfield and ‘racing’ doesn’t go hand in hand. But the brand has been changing people’s perceptions for the last many years now. In a latest, it has ventured in the American Flat Track competition which was recently held at Williams Grove Speedway in Pennsylvania, USA.

The company is running its FT Twins which is based on the Interceptor 650 albeit with major changes. It is a joint development between RE and Moto Anatomy. Royal Enfield has a partnership with Moto Anatomy which is a race team that is owned by racer Johny Lewis. The FT Twins has inputs from racing chassis builder Harris Performance and S&S Cycle – the engine tuning specialists.

Lewis informs that the motorcycle was shipped from India in pieces on 7th September which gave the team almost no time to get accustomed to it. Lewis says that his team worked round the clock to assemble the model within two days. That also meant that there was no time for practice. Lewis could only ride it once at the official practice session on Friday.

Will the Upcoming RE 650cc Cruiser Look Like This…?

Despite all of this, he surprised everyone by finishing third in semi-finals and sixth in the Main race – an eventual standing of 7th overall. These are brilliant results for the motorcycle’s first outing. The next race is on 25-26 September at Dallas Half Mile before which the team intends to fine tune the model and make it even better for the best possible showdown.