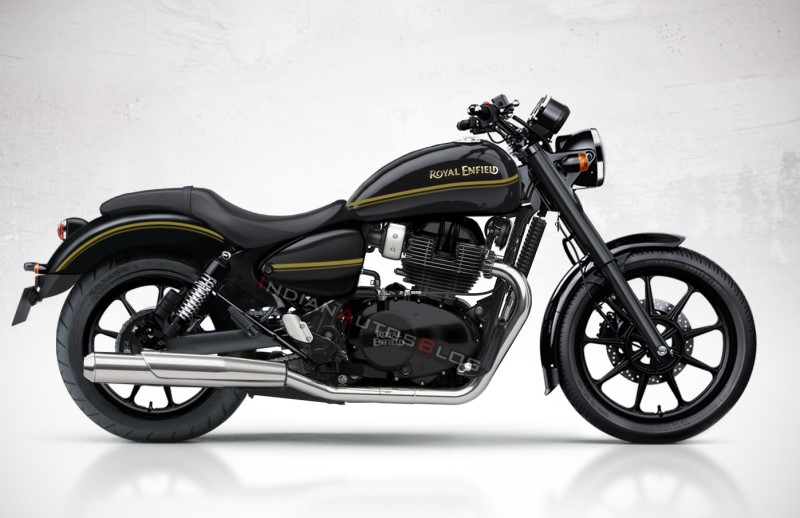 RE 650cc cruiser pic (rendering) lets us imagine how could the bike look in production. It is still in development stages and will be launched later.

We recently reported about the surprise spotting of Royal Enfield’s upcoming 650 cc cruiser motorcycle. The bike could very well be the costliest motorcycle from the Chennai-based manufacturer.

While we have very little information about it right now, folks at Indian Autos Blog have come up with a digital rendering of the bike. Digital artist, Shoeb Kalania, has made sketches based on the spy video that surfaced recently.

The render shows a relaxed and laid-back riding position, in line with the bike’s cruising characteristics. We can also see those blacked-out USD forks. In fact, the entire motorcycle adorns an all-black theme, except the exhaust system. It gets golden stripes along different body panels and the fuel tank.

The render sports a round headlamp that retains the classic look that Royal Enfield would want. The 9-spoked black alloy wheels look very similar to the ones that are found on Bajaj’s Avenger.

The motorcycle is expected to borrow the 650cc twin-cylinder engine from the Continental GT 650 and Interceptor 650. However, we expect it to be tweaked to meet the cruising abilities of this tourer.