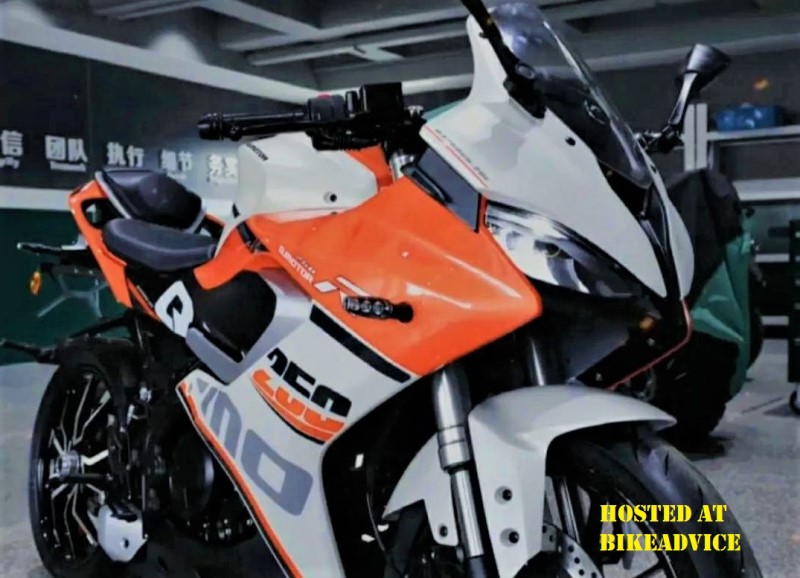 Check out upcoming single cylinder QJMotor QJ250/ Benelli 250 pics that reveal the bike in total. Look at that Ducati like styling and single-side swingarm…

Barely a while back we got to known that Qianjiang – the parent company of Benelli and QJMotor, is making a single cylinder quarter liter motorcycle. And this has become a big talking point. Apart from the possibility of it spawning a similar Benelli model, it is the single sided swingarm and Ducati-like styling that has grabbed a lot of eyeballs.

After we shared the type-approval pics along with a spyshot, here are some more images of the upcoming model. The split twin headlamps get LEDs inside them. The fairing appears to be well-sculpted with just the right amount of puff.

We are not sure about the exact name of the model yet but we can see a small ‘QJ250’ inscribed on one of the pics (so let’s call it that!). The side blinkers protrude out from the fairing and are LED units. Then there are those silver colored Upside Down front forks.

Qianjiang has got it registered in the race theme livery which is a triple-tone shade – of white and red as prominent bits apart from a few parts that are painted in black. The flowing tail ends up with a highly perched split seat set-up and a 3-vertical-slits LED tail lamp.

But then there is that single sided swingarm, that we come back to, that steals the show, further aided by those diamond cut alloy wheels. Qianjiang has also patented a variant with conventional swingarm.

Why are we excited about it in India? Because various motorcycle models are code-shared between these two brands. Which means that there is a big possibility of an equivalent Benelli model – or the same model being sold in international markets under the Benelli moniker.

This QJ250 is powered by a 250cc engine that churns 27.5 bhp of peak power. This appears to be the same motor that we had on the Leoncino 250 in India (which is also slated to return).