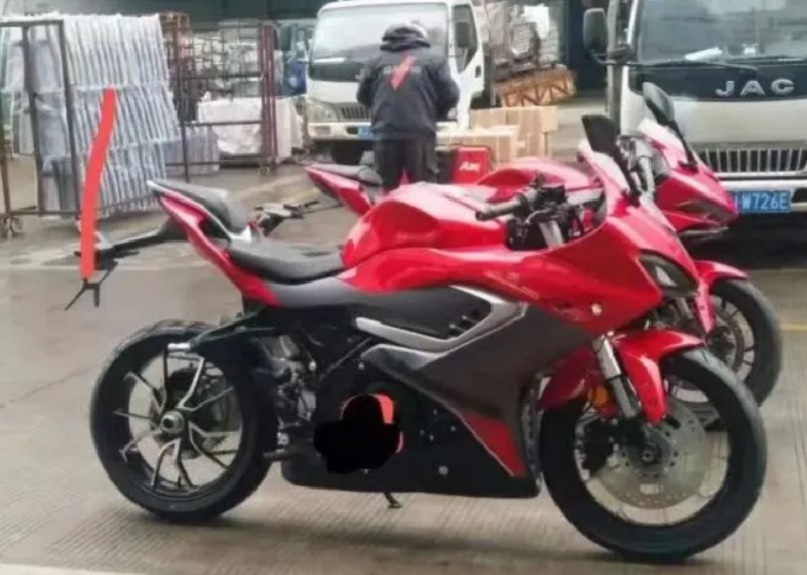 This could also be Benelli’s upcoming 250cc motorcycle for a lot of markets. It is currently patented under QJMotor’s badge..

Currently it is carrying QJMotor’s badge but many similar motorcycle models use Benelli’s badges outside China. This model, probably called as Race 250, has a hint of BMW’s design to it. Its split twin headlamps exude aggression and the red and white color theme adds sportiness.

Actually, there are two variants that have been patented. The difference lies in the swingarm and braking set-up of these models. The trim that could probably be marketed as an entry variant gets tubular conventional dual side swingarm and the higher variant is equipped with a aluminum single-sider – just like Ducatis!

Apart from its type-approval pics, the motorcycle has also been snapped on the road, in singletone red color, hinting that it may be closer to production.

Now, interestingly, this model is equipped with a single cylinder 250cc motor that is capable of producing 27.5 hp of power and weighs 159 kilos. It looks like it gets the same motor that Benelli had on the Leoncino 250.

Since the platform is ready and in front of us, this could be Qianjiang’s entry level 250cc model for a lot of markets – where it could either be sold under QJMotor or as a Benelli. And with the 250cc segment booming in India, Benelli’s top bosses may discuss its prospects for our market as well.