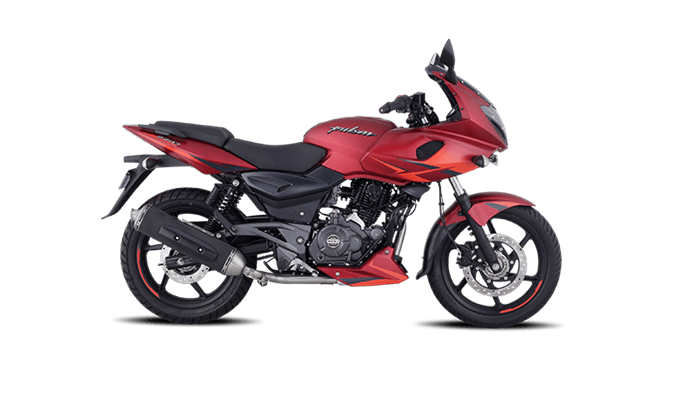 Pulsar 220 pics in new volcanic red colour shared on this page. It joins the other two black colours in the lineup…

Not only is the Pulsar 220 Bajaj’s highest selling big Pulsar in the lineup, it is also one of the largest sellers in the Rupee 1-Lakh bracket in India. This is massive considering the kind of competition it has seen in all these years and that it has remained largely the same in terms of looks (and mechanicals) since its inception in 2007! We have talked about its impressive sales in this story.

To ensure it passes through the April 2019’s safety ruling, Bajaj recently equipped it with Antilock Braking System (ABS) which has meant that it has moved higher up the pricing range and now costs 1.07 Lakh ex-showroom in Delhi. The 2019, safer model, initially introduced in two colours of Black Blue and Black Red now has a third option called as Volcanic Red.

Unlike the first two colours where the base colour is black (and has contrast coloured decals), the new Volcanic Red has matte red colour as the base with orange/black coloured decals. The black treatment to the engine, alloys and exhaust canister has been carried over.

Apart from the new paint theme, nothing else appears to have changed. Which means that the new Pulsar 220 continues with the same 220cc, single cylinder, oil cooled engine which can produce 20.93 PS of peak power at 8500 rpm and 18.55 Nm of max torque at 7000 rpm.

Apart from this, Bajaj has also decided to take the Pulsar range down in the pecking order and they are about to introduce a Pulsar 125 for the first time in India soon (details).