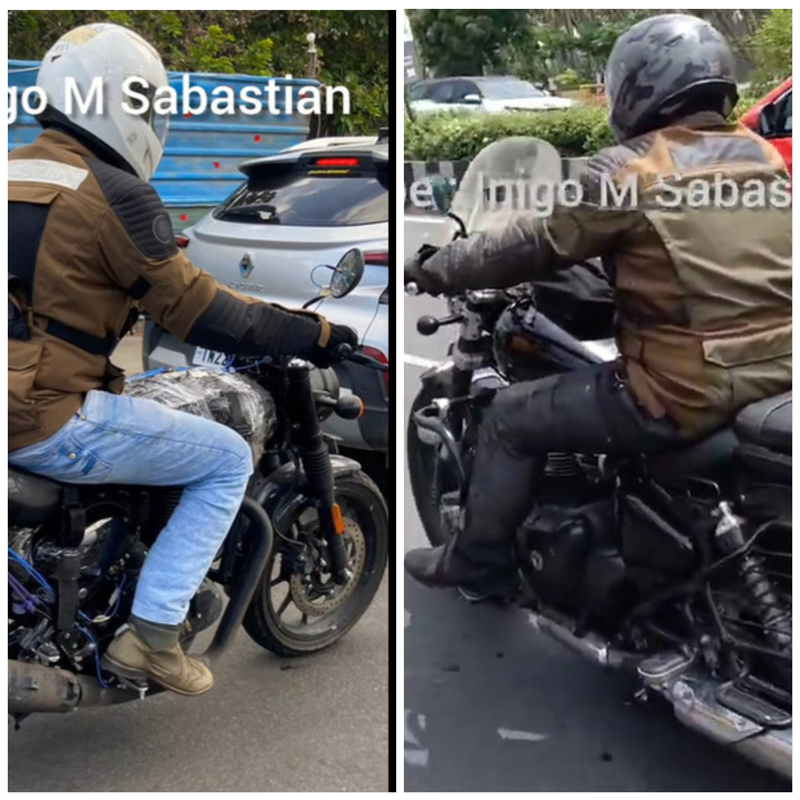 We are going to say it again – Another day, another Royal Enfield test-bike sightings!!

This time the upcoming Hunter 350 roadster and the mighty cruiser Super Meteor/Thunderbird 650 have been spotted testing on different occasions and their exhaust notes have also been captured. The mighty cruiser also gives us a glimpse of some of its accessories as well.

Thanks to Youtuber – Inigo M Sabastian – we have yet another instance of captured exhaust note of the upcoming cheapest motorcycle from Royal Enfield.

Being powered by the new J-series  349 cc, single-cylinder engine, the Hunter 350 is emanating a throaty sound in the video – very characteristic of the Royal Enfield bikes.

From the video and the images we have captured from it, we can see that the Hunter is undergoing its final stages of testing in the city & urban environment. Extrapolating from the speedometer of the bike from which the video has been captured, the Hunter 350 was doing around 35 – 40 km/h in the traffic.

The Hunter 350 was fully camouflaged and was carrying a big data collection box with various wires coming out of the engine and going into it. Clearly, there is still some testing and data remaining to be gathered and studied by the company before the bike is finally unveiled to the customers.

Let’s talk about the big-boy cruiser.

Again, thanks to – Inigo M Sabastian – we have a much clearer view of the upcoming big cruiser from RE and a good sample of what the bike could sound like.

From the angle the mighty cruiser has been captured, the Super Meteor/Thunderbird 650 looks as big as the Maruti 800 of the olden days. It has such a big presence in the traffic that it occupies as much space as a small hatchback.

And, if you listen closely, you can hear the deep rumble emanating from the twin chrome-finished exhaust pipes, which are precariously close to the road. Maybe RE have created a new exhaust system for the new Super Meteor/Thunderbird 650 which will give it a distinctive deep rumbling note, enough to warn the road users of its approach.

From the images, we have taken out of the video, we get the first glimpse of the offered/standard accessories we could get along with the mighty cruiser. We can see a tall windscreen mounted at the front, right on top of the round headlight. However, there is a small slit cut-out on the windscreen. We wonder what that is for??

Moving down, we see a front crash-guard & leg protector with White-coloured auxiliary lights mounted on it. These lights seem to be similar to the ones which were seen on the Hunter 350 earlier.

Looking at the finished state of the bikes, it is only a matter of time before Royal Enfield will unleash these machines on our roads.