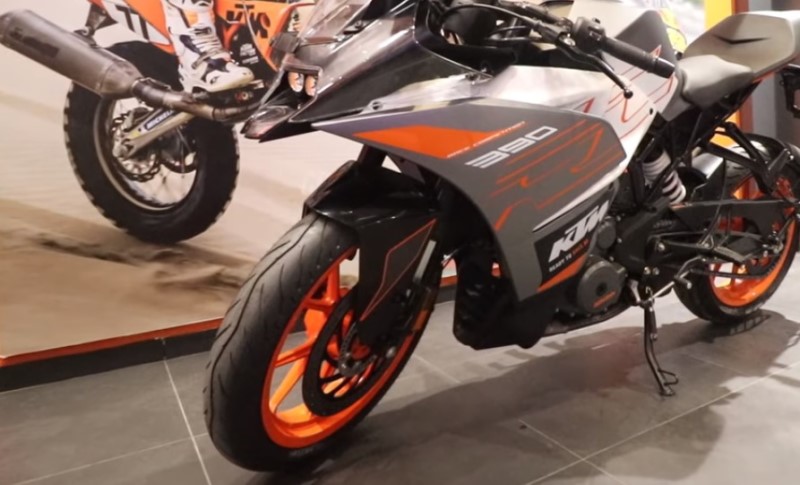 KTM RC390 tyres have been downgraded from Metzeler to MRF in the newest iteration. However, prices have not been reduced….

Along with many other features, KTM’s RC390 and 390 Duke are also liked because of the extremely grippy Metzeler tyres they come equipped with. They have been in the market with the same set of tyres since the very start. In fact, even when the 390 Duke was launched for the first time in the Indian market (at shocking price tags of under Rs 2 lakh), it wore the same rubber.

However, for the first time, it appears KTM has downgraded its RC390 with a lesser rubber! The 2020 RC390 which was introduced in a new silver color has been spotted wearing cheaper MRF Revz C1/FC1 tyres. These tyres are offered on the smaller KTMs and on the Dominar 400 – mainly to cut costs.

Though KTM hasn’t released any statement on this, but we believe it could be some sourcing issue and to not lose out on the festive sales, the company thought of going ahead with locally available rubber from MRF.

The problem however, is that the retail cost of Metzeler tyres is around or upwards of Rs 15,000 for a set whereas the MRF’s can be had for around Rs 7000-8000 which is almost 50 percent price reduction.

Now, if KTM intends to sell its RC390 (and may be the 390 Duke as well) with MRF tyres for a temporary period, it should offer proportionate discounts on the motorcycle(s). Or a better solution could have been to plonk rubber from Michelin, Pirelli, etc which are close to Metzeler in performance.

So, if you are in the market for any of the KTM’s 390s, try to get one equipped with Metzeler tyres or wait for a few months in the hope that this is a temporary move from the company.

Here are the tyre options for KTM’s 390s