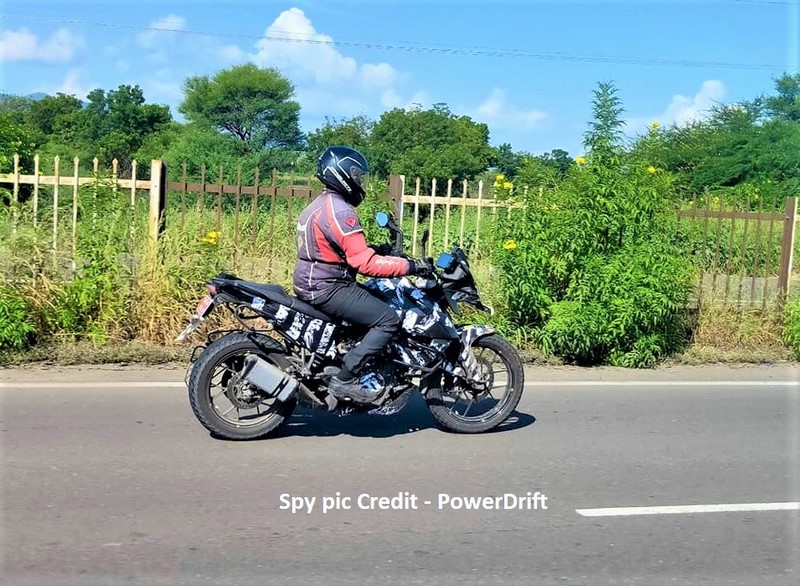 Purported KTM 250 Adventure spy pics have surfaced on the internet and if true, get ready for a well priced, reasonably powered, ‘for-all’ ADV!

Under camouflage if they go ahead and test the current generation Euro design Dukes, it would be immensely difficult to specify which particular mule is 250 and which one is 390. Even in production form, there are not many differences in the way they look. Apart from the colouring theme, the two major distinguishing factors are the headlamps (250 gets halogens whereas 390 comes with LEDs) and the instrument clusters (250 has the older Duke’s console whereas 390 has the Bluetooth enabled TFT screen).

A similar level of differentiation is expected between the upcoming 390 Adventure and the speculated 250 Adventure. A new test mule has been spotted on the streets of Pune. It is equipped with a halogen headlamp which hints at the possibility of this being the 250 Adventure under wraps. Rest of the stuff, including the TFT instrumentation, appears to be very similar to the older test mules, which are believed to be the 390 ADV under tests.

It must be known that older test mules have been spotted with LED headlamps, similar to the 390 Duke. Since we are very close to the official unveiling and the launch of the motorcycle, KTM must have frozen at least the external parts which will go to production and these should be the final test mules, either for endurance testing or for some minor last minute setting tweaks, or something related.

If this indeed is the 250 Adventure, it may also debut at the upcoming EICMA, besides the 390 ADV. It is reported that 390 Adventure will be launched at the India Bike Week (dates & details) and it will be interesting to see what strategy KTM follows for the quarter liter ADV.

The basis of the existence of the 250 Adventure is the expected eventual price point of the 390 Adventure of around 3 Lakh. The 250 ADV can be a more practical, substantially powerful option for the masses at around 2.25-2.40 Lakh.