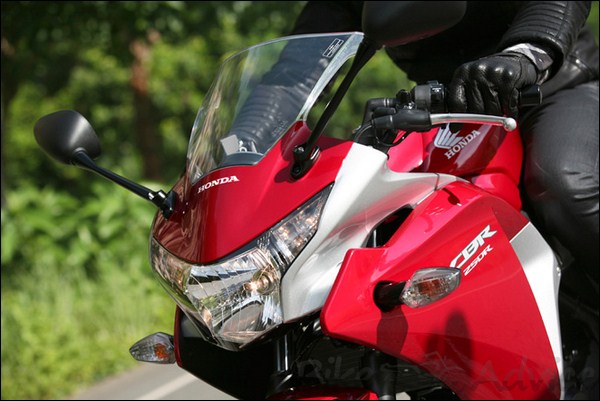 Back during the financial year 2013, Honda had a very healthy market share in the affordable premium sportsbike segment (motorcycles priced between 1 lakh to 2.5 lakh) but in a clear case of neglecting this segment, they have suffered badly. This can be proved in numbers.

According to the following old slide shared by KTM at 2017 Dukes’ launch in February 2017, Honda had a very respectable share of 32 percent with KTM trailing at 13 percent in FY 2013. Yamaha, with its R15 led the way at 55 percent. Four years down the line (ie till last year), things changed dramatically. Bajaj entered the game with its Pulsar range (and now Dominar 400) and has took the first spot with half the market share. Note: data till last year. 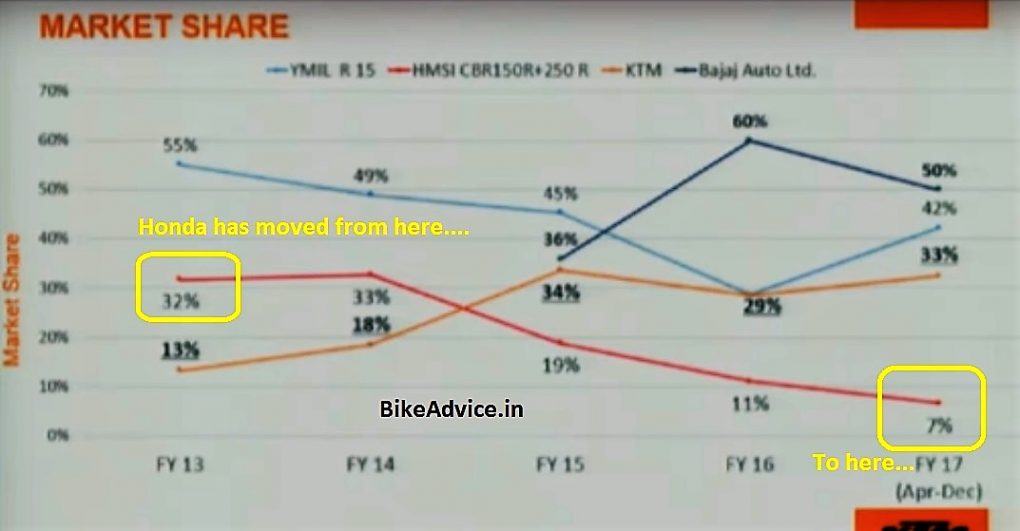 Yamaha followed, trailed by KTM at 33 percent. But look at that – the biggest looser of the segment, by a massive margin, was Honda which was reduced to a paltry share of only 7 percent. This also made them the manufacturer with the lowest percentage of share in this segment, despite being one of the early movers! And obviously with the discontinuation of both the CBR150R and CBR250R last year they have moved to zero!

Obviously, a lot can be talked about – why specifically this price point and why are we going by KTM’s definition but a simple answer to that is – this is the most approachable price band for the majority of Indian motorcycling enthusiasts where they take the first taste of performance and power.

A layman with literally no understanding of motorcycles can say that it is the “absolute no interest” from Honda which caused their CBR 150R and CBR 250R to lose, despite they being wonderful motorcycles.

Yamaha has already launched the FZ25, Fazer 25 as well as the brilliant R15 v3 (read review); Bajaj has shot in their Dominar 400, refreshed their complete Pulsar lineup, KTM has introduced the all-new Duke 250, 2017 Duke 390, TVS has entered the game with the very competent Apache RR 310 but what has Honda done to their CBRs?

The 150 is no more and they have recently introduced the India-spec 2018 CBR250R which is exactly the same as the motorcycle introduced back in 2011!

What brings in more pain is that – internationally the CBR250R and CBR150R have seen two major updates and these are markets like ours. But India again gets the same old motorcycle, which is almost untouched since its launch (apart from the addition of some graphics).

Simply put, they are paying no heed to this segment and even the most ardent fans have moved out of their portfolio. With BMW and others joining this segment soon, we foresee Honda fighting it out for almost a single percent market share in the years to come!