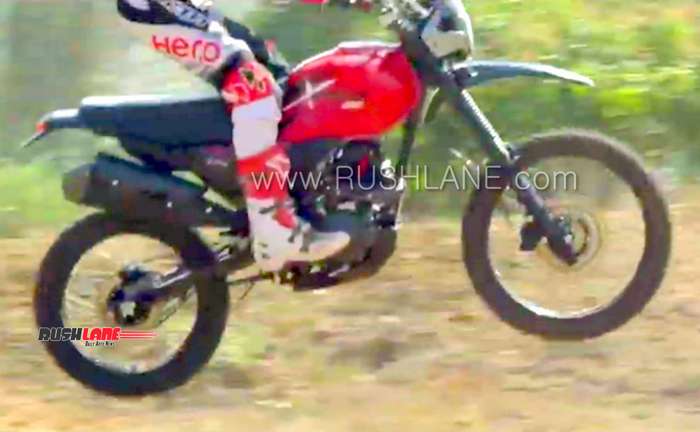 Ahead of Hero Xpulse 200 launch in the domestic market, a Youtube video surfaced but for some reason it has been taken down…

Spy pics are something which manufacturers probably can not completely avoid. If a motorcycle is on the road testing, it will get clicked. But what Hero has done is something that reflects their ‘confusion’ again!

A video of the upcoming Xpulse was published on Youtube according to Rushlane, however, it was taken down within a short span of time. It featured CS Santosh, Hero’s factory rider and Dakar Rally participant, riding out (what look like) the production version of Xpulse as well as an off-road centric version which may or may not be introduced. What you see here are screengrabs from the same video.

What is not known is if this video was uploaded at Hero’s official social channel or somewhere else. If it was hosted by Hero removing it from Youtube again calls out for their indecisiveness. This comes after the Xtreme 200R’s launch was indecisively long and quite clearly revealed Hero’s reluctance.

Earlier, Hero created a big hype by showcasing the 31PS 250cc sports motorcycle HX250R in two consecutive Auto Expos – first in 2014 and then in 2016. Few years later, they said that they have shelved that project because, hold your breath, ‘the market has moved on and this model doesn’t justify its launch now!’ 😀 .

In the case of Xpulse they have overshot the first ‘officially’ announced launch timeline and are on the verge of evading the second one (“Early 2019” shared in a press release) as well. Hero is turning out to be one manufacturer which is letting out its ‘lack of control’ in their own enterprise public.

Nonetheless, the good news is that Hero may be thinking of commencing the initial promotions of Xpulse which may suggest that a launch may be, after all, in the offing sometime soon. One of Hero’s top official had also confirmed that Xpulse 200 will be launched ‘under 1 Lakh‘…