This is perhaps the most important article in BikeAdvice for this year. The two giants face each other in a duel. These bikes are the Titans, at least for the Indian biking industry. The Hero Honda Karizma nearly ruled the premium biking segment in India until the legendary Yamaha R15 showed up in the glossy showrooms of Yamaha. Let me walk you through the comparisons of performance, looks, handling, comfort and other features. 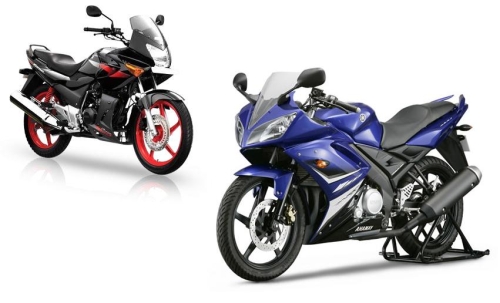 Performance: Even though at the first glance Karizma seems to overpower the R15 in terms of displacement, the 150cc engine of R15 cannot be downgraded in terms of engine size alone. With a host of special features like liquid cooling, DIASIL cylinder and six speed transmission Yamaha R15 simply rocks. Ok lets not get too much into the details, lets analyze the feel…

I took a blue Yamaha R15 to the highways today. I was excited for sure. I did not bring my helmet with me, so I had to calm myself down from revving too much, but I couldn’t keep up. I pushed the engine upto 117kmph and it refused to go any further. I have heard many users that they have tried upto 140kmph, the fastest ever speed for an Indian bike, but I do not know what is wrong with this unit. The engine had clocked 2,000 kms so far. In Karizma I have pushed it upto 120kmph. While Karizma vibrates a little at that speed, R15 is like a rock, no vibration at all!

One thing that is clearly evident is that the riding position is far different in this bike. While you sit in an upright position in Karizma, R15 needs you to sit in a real sporty position. So what difference does it make? Well, you are 2-3 times more confident in R15 than in Karizma at such speeds. The aerodynamic sitting posture makes the difference. The air hits our chest at an inclination and escapes easily below our arms which reduces air friction. You cannot expect that in a Karizma unless you volutarily lean down which becomes a little uncomfortable. Regarding pickup, Yamaha R15 does not give me enough adrenalin as that of Karizma. If R15 had a 200cc engine atleast, this would have been taken care of.

Handling: There are big differences between these two bikes when it comes to handling. In Karizma you can easily manage the turns in the urban streets, the sitting posture is similar to other bikes and it is easy for you to take your foot to the ground to get your balance in case the bike slows down too much. This is very difficult in R15. The sitting posture requires you to fold your legs at an acute angle and have your foot a little higher than the other bikes, thus when you need to suddenly slow down for a sharp turn in the city road, it is uncomfortable to bring the leg all the way down. So if you are not going to use R15 much in the highways, then you will not get a good return on investment of your bike. Consider Yamaha FZ16 for exclusive urban commute. Karizma seems to manage both highway riding and city travel.

Comfort: Both the bikes are the flagship models of two big companies in India, so you need not worry much about the comfort. Eventhough the sitting posture is different in the two bikes, you can still have an ultra ergonomic posture. I have not found any particular uncomfort in the Karizma, but one tiny thing which bothers me in R15 is the gear shifting. Unless you are wearing a good shoe, it is very difficult to bend your ankles to shift up the gear if you are wearing leather shoes or casual sandals. I would advice you to notice this if you test R15.

Looks: I need not say anything about this. We all know that Yamaha R15 is the most gorgeous sexy bike ever. Since it is derived from the R1, there is no question of comparing it with Karizma. Perhaps in the near future, Hero Honda will clone CBRs and other Honda sports bikes, but nothing is for sure. Anyway even in the foriegn countries, Yamaha has always won the beauty competition. The only lack I feel in the R15 is the ultra thin bi-cycle like rear tyres. The tyres are well designed for performance, but broad tyres really give out that manly look which I feel is very important when the price of R15 is placed at Rs.1,00,000 plus.

Conclusion: I cannot give a trophy to one of the bikes because I love them both and each do not compete directly with each other. Karizma is for the status, city ride and occasional high speed cruising. R15 is for pure biking enthusiasts who feel like heaven while cruising in the highways, that’s why Yamaha has given the additional 6th gear for R15. Go for Yamaha R15 if you accept that it is a little difficult to handle in sharp turns. Difficult in the sense, I mean it is not easy as Karizma. Go for the latter if you are a fan of Hero Honda and want ease in urban roads.

Even though this review is a good guide for you, when you are making a big invesment to buy such premium bikes, always drive it yourself and weigh your priorities. For some people, the stunning looks of R15 may be addictive and would buy them even they do not get a chance of riding in highways much and will later regret it. Focus on what you really want, is it status, looks, performance, ease of handling or pride of branding and choose the best bike for yourself.