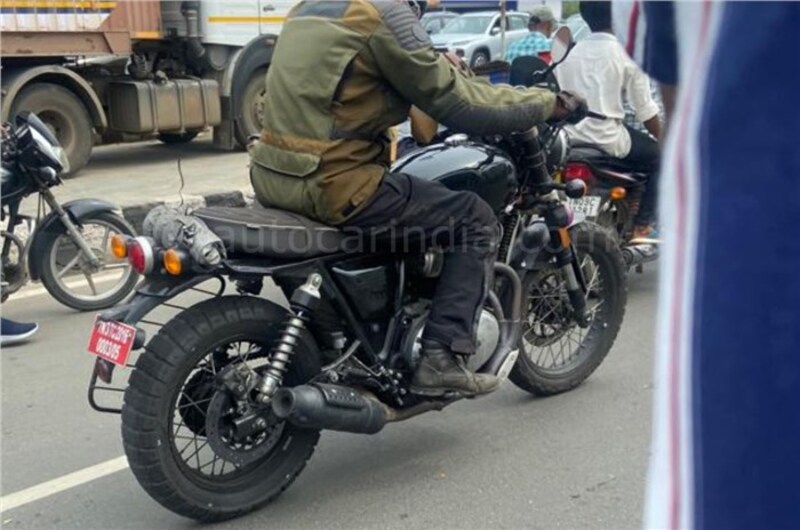 Well, Royal Enfield have been testing the new Scrambler in India and it has been captured on a digital lens.

So, the new Scrambler 650 test-bike that was spotted in the U.K. was sporting design & mechanicals very similar to a Scrambler motorcycle, mixed with small design elements of a flat-track racer.

The overall look of the bike appears to be broadly the same – an Interceptor 650 base bike with relatively longer suspension and minimal bodywork. The complete look of the bike is that of a minimal nature.

The seat is a single-piece flat design, the indicators are amber-coloured lenses covering bulbs within, the tear-drop-shaped fuel tank, round tail-light with chrome surround and block-pattern tyres.

Yet, the most interesting element on the Indian test-bike and the U.K. test-bike alike is the use of the 2-in-1 upswept exhaust system, which RE have been testing in various iterations. Instead of the dual-exhaust pipes running separately along the length of the bike, the company has modified the whole system to have a compact single-upswept unit aimed for off-road use.

One small new element is also spotted on the Indian Scrambler test-bike. If you look closely right below the turn-indicators, you can find small round auxiliary lights-esque attachments fitted with red coloured lenses on it.

It is interesting to note that, as of now, Royal Enfield are not offering any auxiliary light accessories for their various offerings. We have spotted various dummy auxiliary lights on numerous previous test-bikes, especially on the upcoming Super Meteor/Thunderbird 650, but they were no wired connections to it.

Could Royal Enfield be expanding their Accessories Catalogue and adding auxiliary lights for various touring and ADV bikes in the coming months???

Looking at the whole picture, it is interesting to understand what Royal Enfield is planning regarding their product portfolio.

Their 350 cc platform is well established, with all models well-loved by Indian and overseas buyers alike. Their Himalayan 411 and sibling Scrambler 411 is the most popular ADV duo in India and now they are poised to introduce a new 450 cc platform soon which will spawn the new Himalayan 450 ADV and a Roadster 450.

Their premium 650 cc platform is ready to add at least 3 new models in the next 2 years. The Interceptor 650 & Continental GT 650 established the high-end persona of the platform which the upcoming models will carry forward and build upon.

The first of the new 650 cc models will be the Super Meteor/Thunderbird 650 true cruiser model, scheduled to launch as soon as next month (November 2022). Then will come the Shotgun 650 which will be a cruiser-roadster motorcycle. Then will come this Scrambler 650 model and the rumoured Classic 650 model.