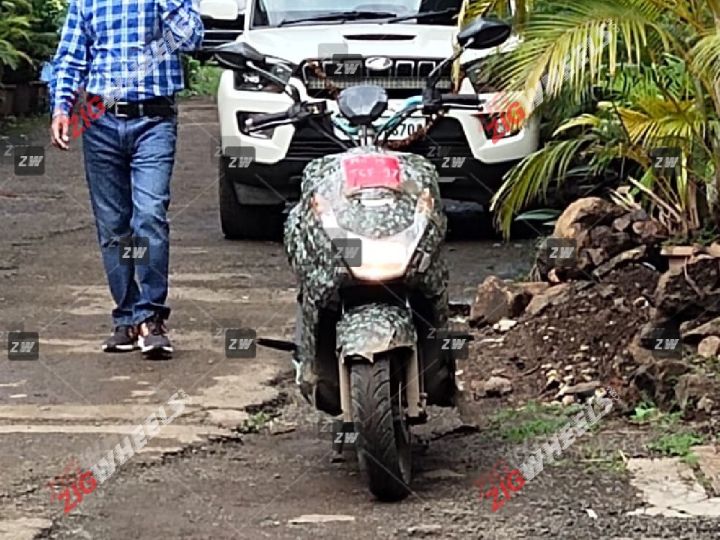 So, other than Honda, Mahindra is another big-name manufacturer that is still awaited to enter the Indian Electric scooter market.

It is expected that Mahindra’s majority share (51% stake) in Peugeot Motorcycles will be put to good use by the company and their upcoming ICE products and especially electric scooters. This thought process has been proven correct with the recent sighting of a petrol-powered scooter being tested along with a new electric scooter sibling.

So, there were 2 test-scooters that were spotted and shared by an online portal – one being an ICE scooter and the other being an electric scooter.

The more interesting one here is the electric test-scooter which has been captured being tested & benchmarked alongside Ather 450X and Bounce Infinity E1 rivals. The design of the electric scooter also seems to be based on the Kisbee 50 petrol-powered counterpart and bears very basic aesthetics & design features.

This could indicate that the Mahindra electric scooter could have performance similar to the Bounce Infinity E1 electric scooter, against which it was being benchmarked. It appears to be a very similar strategy to how Suzuki is also working on an Electric Burgman scooter, modifying and adapting an ICE Burgman scooter sold currently.

There is no harm in assuming that the new electric scooter could be a 50 cc-equivalent offering for the Indian market. Internationally, the Peugeot Kisbee is powered by a 49.9 cc, 2-stroke motor that produces 3 HP and 3.2 Nm of torque aided by an automatic transmission. It runs on 12” wheels and is equipped with a disc brake at the front with a drum setup at the rear and weighs just 90 kg.

Expect Mahindra to take their sweet time testing and benchmarking their new products before they introduce them in our country. They will also be testing to qualify their new electric scooter to fulfil the new electric safety guidelines MoRTH have introduced recently.

So, expect the launch announcement of the new Mahindra electric scooter not before the second half of 2023.