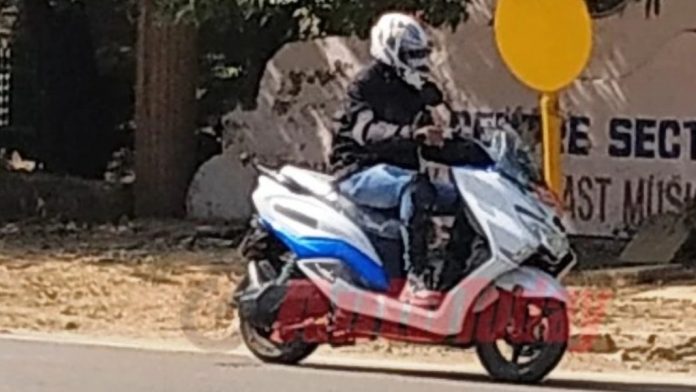 Burgman electric spy pics have surfaced revealing Suzuki’s plans for our market. It almost gets clear that the company is contemplating the electric route here…

Few months back, Devashish Handa, the Marketing & Sales Head of Suzuki India, said that the company is evaluating the electric 2-wheeler market in India and will introduce them ‘once the market is ready‘. You can read read more about it here.

It looks like – the company now considers it the right time to get into the electric bandwagon as for the first time it has been caught testing ‘something’ electric. An online portal has snapped two white mules of the Burgman Street maxi-scooter, probably somewhere in North India. Apart from those red number test plates, the most prominent bit to note is the absence of the exhaust in both the scoots.

Upon careful observation, it gets unearthed that the maker is already testing electric 2-wheelers on our soil. The test mules are running on a different white color which has blue tinges (instead of brownish on the production Burgmans).

Though we get to understand that Suzuki is definitely developing electric tech for our market but what is interesting is this question – will it come on the body of the Burgman? Or will Suzuki create a new shell for its first electric scooter?

While we await answers of a lot of questions that have suddenly cropped up with this revelation, what is certain is that Suzuki is getting ready to join the movement that has been created by Ather, Bajaj, TVS and many other smaller start-ups…

BIG: Next-Gen Pulsar Spotted Testing BUT Is It Really Pulsar 250?