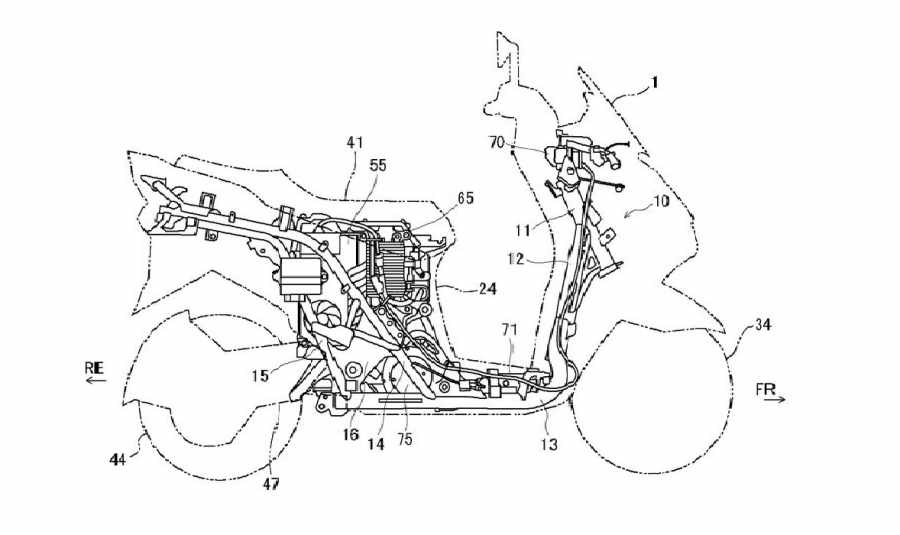 Suzuki Burgman Electric patent pics take us a step closer to the scoots introduction. It could be the first electric 2-wheeler from the Jap…

Timing it right with the rise in demand for EVs, Suzuki has apparently patented its scooter Burgman electric. This is revealed by some patent documents that have surfaced over the internet.

As per the design files, the motor will be set in the middle of the scooter body. It will connect to the rear wheel via a belt. Even other electronics and batteries will be present right beneath the seat.

If we take a close look at the Burgman electric patent files, for temperature handling Suzuki is using a cooling system in the motor. It has ducts for channeling the heat in and out of the motor while the scooter will be running. The motor also uses a fan to keep the temperature down.

As of this writing, there is no technical detail available regarding the upcoming Suzuki Burgman electric, its motor or its battery. However, it gets cleared that Suzuki is actually taking the safer route of using the existing design of the Burgman Street onto its upcoming electric scooter.

Spy pics of the Suzuki Burgman electric have already surfaced in India and the absence of the exhaust was the giveaway.

India has a promising future for electric vehicles. Already brands like Bajaj, Ather, Revolt, TVS and many others have launched their electric two-wheelers. Now with this latest development, expect Suzuki to join the bandwagon and drop its electric scooter in the months to come.

This comes amid the major push from the Government. Recently there was a major raise in the subsidy for FAME II which reduced prices of electric vehicles drastically.