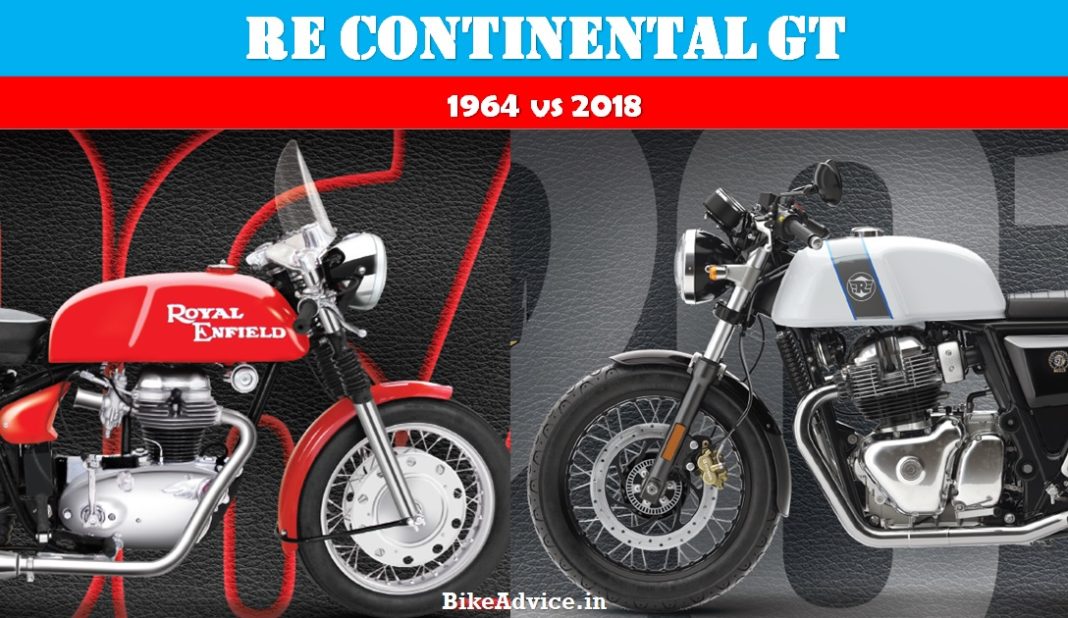 RE Continental GT Old vs New – We present the evolution…

Royal Enfield is trying to reinvent the cafe racer culture in India. They tried it first with the single cylinder 535 cc Continental GT and up next is the twin cylinder Continental GT 650 which will be launched towards the end of this year (more details).

Cafe Racers were lean and agile motorcycles which were used for casual racing between cafes in Britain and this culture was very famous during the 1960s. Motorcycles hitting a ton (100 miles per hour or about 160 kmph) was an achievement.

You must know that the first Continental GT was launched by Royal Enfield back in 1960s. It was powered by pure cafe racer adrenalin, insanely low-set clip-on handlebars, big drum brakes, and a company-commissioned race run 250 cc single cylinder engine which earned it the title of “Britain’s fastest” – not bad for a 250 cc in 1964!

The 2014 CGT tried to reinvent the same charisma but sales were not satisfactory and hence it has been discontinued. However, Royal Enfield believes there is a lot of juice to be extracted in this genre of motorcycles.

And in comes the latest and the most modern Continental GT with a lot of contemporary technology without losing out on the retro touch. The upcoming new CGT 650 is loaded with a thinner single seat (pillion seat would be optional as we believe, or vice versa), muscular looks, oil cooler, gas-charged shock absorbers, disc brakes at both ends with ABS as standard etc.

However, it continues with a very similar tank design, minimalist body, round headlamp and the overall silhouette of a cafe racer! And finally, we may have an RE cafe racer which may hit a ton (in mph)!