Update 23 Oct 2017 – In an interview with Malaysian website Paultan.org, Benelli’s Marketing Director for America, Asia and Africa, Dante Bustos probably hinted at this motorcycle. For the first time, he revealed that they are working on a (new) 150 cc single cylinder engine along with a single 250 cc motor. However, he did not share its launch program.

Original Story – Benelli is working on a new 150cc motorcycle as these leaked design patent pics reveal via Motorcycle-Magazine. Internally codenamed as BJ150-31 (also marked on the motorcycle’s body), the ‘Benelli’ branding at that front brake caliper confirms its roots. Deciphering the code, ‘BJ’ suggests that this motorcycle will be sold under Benelli brand (and not QianJiang), ‘150’ denotes its engine capacity and the last number probably signifies the design number.

Unlike what you may think, this does not appear to be a budget offering. We can notice features like..

These suggest that we are looking at something in the ballpark of the Yamaha R15 in terms of premiumness, however specs of the upcoming motorcycle can not be ascertained at the moment. 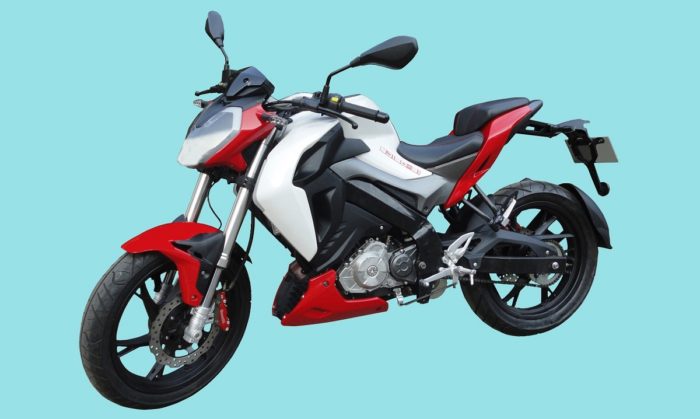 The muscular tank with a raised tail and an enlarged wheelbase has KTM-like vertically-split headlamps (which may turn out to be LED units in production). Considering the completeness of the paintwork (dual-shades) it appears that these are final sketches of the Benelli 150cc and it may not be too far off from introduction.

Since we are talking about 150ccs, this is an indication that the motorcycle may be designed for Asian markets like ours. There can obviously be other iterations and variations on the same platform.

Also Read: Benelli’s Next Motorcycle is Coming in November & It is NOT TRK 502…

And if we are right, DSK will surely consider bringing it here and if they can locally manufacture it, we are up for a new serious entrant in this gameplay. Recently, the Indian distributor of Benelli has been caught testing a 250cc cruiser and a swanky 250cc scooter on Indian soil and they have pans to introduce a Duke-390 rival at the Auto Expo.