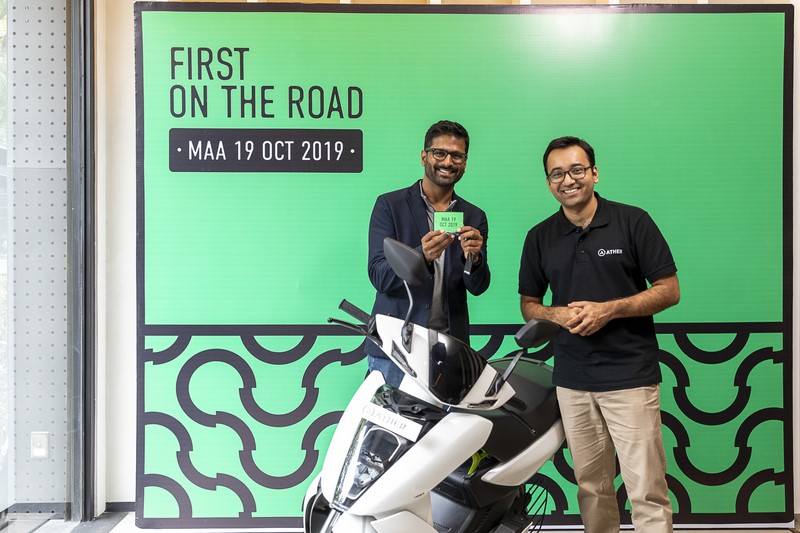 Ather Chennai deliveries have started after bookings commenced three months back. With this, pre-orders for the new batch have also started…

Ather Energy, which opened pre-orders of its scooters in Chennai in July 2019, has commenced deliveries of the first batch to its customers. Chennai is the second city Ather ventured into after a very favourable response in Bangalore.

At an event on Saturday, Ather’s CEO and co-founder Tarun Mehta handed over keys of brand new Ather 450s to its first customers. The press note informs that nearly 100 scooters will be delivered in this week, along with Ather Dot – company’s for-home charger. You can read more details and prices of Ather Dot here.

Ather informs that pre-orders till December 2019 are full, and it has opened bookings of its flagship and lone scooter 450 for deliveries in February and March 2020. Prospect customers can visit Ather Space – Ather’s experience center, to test ride 450 and he/she can book the electric scoot either at the dealership or online at Ather’s website.

In the background, Ather is investing in expanding the charging infrastructure in both the cities of Bangalore and Chennai. It recently roped in ‘Chai King’ under its charging network ambit which will add 30 outlets across the city of Chennai. With multiple fast charging points, Ather’s Chennai owners can enjoy free charging till December 2019.

After settling down with the first two cities, Ather will venture in Hyderabad, Delhi, Pune and Mumbai. Recently, Bajaj ventured in Ather’s space and launched Chetak – its first ever electric scooter in India. It will be launched in January and the expansion will start from Pune. However, in contrast, Bajaj does not appear to be very keen in setting up charging infrastructures.