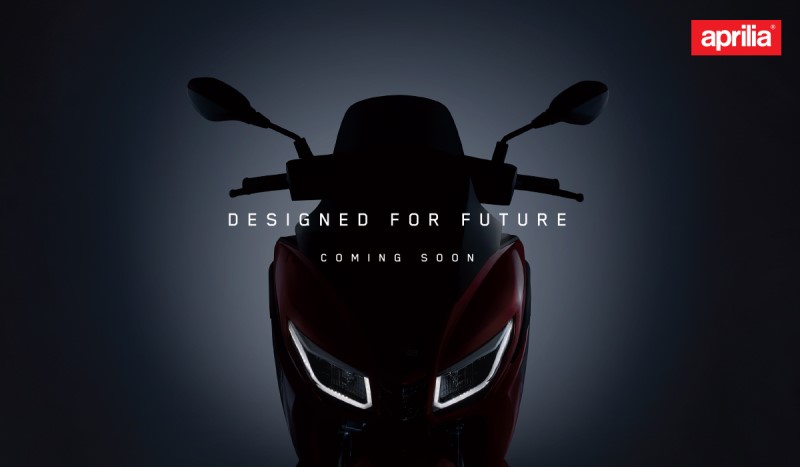 Aprilia SXR160 launch in coming weeks. It will be the second maxi-scooter that India will get after the Suzuki Burgman Street…

Aprilia has understood that the easier way to penetrate the Indian market is through scooters. But the good things is that it is playing in the sports oriented scooters segment which was almost non-existent till a few years back.

After setting foot with the SRs and its variants, the next big launch from the Italian maker is the SXR 160. The SXR160 will be the second maxi-scooter to be launched in the market to rival Suzuki’s Burgman Street range (which will also get a bigger 150cc variant – more details). It was unveiled at the Auto Expo in February and has received a fair bit of interest.

In a latest, Aprilia has teased it at its official website. The teaser is a blacked out pic showing its split eyeline DRLs on the apron. The muscular scoot comes with twin LED headlamps, bigger and lit underseat storage, split glove box, large tinted visor, big seat, all digital instrument cluster with mileage indicator and 12 inch alloy wheels.

It will be powered by the same 160cc, single cylinder engine of the SR160 BS6 which produces 11 PS of peak power. Considering that the SR 160 range itself tops at roughly Rs 1.13 Lakh, the SXR160 may cost around Rs 1.20 Lakh or higher which is a lot of money!

Aprilia Does a Hero HX250R; Shelves RS150 Without Launch

The ‘crossmax’ scooter will be launched soon and will also have a 125cc sibling but that will be introduced later, probably in the first or second quarter of next year.